Bulawayo registered one of the largest Christian gatherings from the 4th to 6th of November as tens of thousands of Zion Christian Church (ZCC) members gathered to witness the official opening of the Church’s headquarters in Zimbabwe.

Bulawayo is the headquarters of the Church in Zimbabwe. The ZCC leader His Grace The Right Reverend Bishop Dr. Barnabas Edward Lekganyane officially opened the church building, which can accommodate 600 people.

It is the first and only church that has been built out of South Africa. The cost of the construction is US$250,000.

Bishop Lekganyane in his speech said Zimbabwe has been a good neighbor and that his Church understands the difficulties the country is going through. “We have heard over the years about the situation in Zimbabwe. Because we love our neighbour as we love ourselves, we are here for the people of Zimbabwe.”

Bishop Lekganyane condemned the discrimination against foreigners in South Africa. “ZCC is strongly biased in favour of all Africans. We, therefore, urge Africans not to surrender to xenophobia and prejudice against each other.”

The Bishop extended an open invitation to non-ZCC members in the country to visit The Holy City of Moria and receive the blessing of the Lord freely.

Due to the large gathering that attended the event, the church only accommodated Zionist leaders, important delegates and invited guests.

The weekend-long conference was attended by multitudes of ZCC followers from South Africa, Botswana and all-over Southern Africa. It has always been the trend in the Church: when the BBishop travels he is accompanied by a large following. 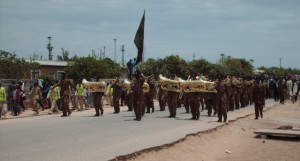 All roads leading to the City of Kings, especially the Beitbridge – Bulawayo road, were a hive of activity, as buses ferried worshippers from all over for the conference.

ZCC hired hundreds of buses to transport its followers to Zimbabwe’s second largest city for the conference.

One could not miss the presence of ZCC followers with their popular greetings Ukuthula!, which stands for Peace!.

The downtown Bulawayo and western suburb of Pumula were awash with ZCC congregants wearing their well-known uniform. The men were in khaki trousers and jackets, with black, flat-topped hats. The women wore bright blue dresses and green berets, or green skirts and bright yellow blouses, green jerseys and berets. And all wear the polished metal five-pointed star on a green background – ZCC badge.

Speaking to RelZim, people who attended the conference said that they had an experience of a lifetime, as they witnessed the official commissioning of their church structure and its dedication to God.

Samuel Ndlovu said the conference was a blessing, as he had the opportunity to listen to the leader of the Church, who delivered a key message of peace to Zimbabwe. “I am happy about the conference and hopeful that the people of Bulawayo hindered the call of God. I had also the opportunity of a lifetime to hear a message from Bishop Barnabas Lekganyane. He is my leader. I have never been to Moria but I got the glimpse of what Moria is like here.”

The Zion Christian Church (ZCC) is one of the largest religious groupings in South Africa, with more than four million members throughout the continent and in the Middle East.

The official opening of Bulawayo branch as the headquarters in Zimbabwe comes at a time when the splinter group ZCC Mbungu opened a large church in Mbungu (Masvingo area). This conference is seen by many as a way of clarifying to the faithful who they are, as there has been confusion in the country as to which is the original ZCC.

Engenas Lekganyane founded the ZCC in 1910, reportedly, after he had a revelation from God. ZCC followers are widely respected for their non-violent behaviour.

Every year, the ZCC hires hundreds of buses (and a railway company Spoornet arranges special trains) for the vast number of pilgrims to attend the three-day ceremony at Zion City, Moria, outside of the city of Polokwane in South Africa’s northern Limpopo Province.