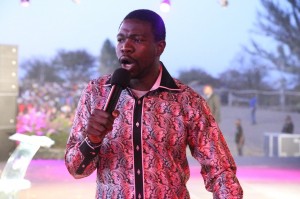 Prophetic Healing Deliverance (PHD) leader Walter Magaya says God has a plan for Zimbabweans despite the challenges they are going through.

Speaking at the beginning of a three-day crusade in Chitungwiza on Thursday night, which attracted thousands of people, Magaya said Zimbabwe should not lose hope for a better future.

“God has a better plan for his people,” he told the multitude of followers who included politicians, businesspeople and musicians.

Magaya started the crusade dubbed Back to Roots by donating various goods to over 500 elderly people in the area.
The crusade, the first mega-event outside his church in Waterfalls, had gospel singer Sebastian Magacha entertaining the crowd.

In the middle of his sermon, Magaya was interrupted by a couple who came forward pleading for assistance, claiming that they were unable to send their child to school.

“I am going to adopt this family. We need to help the underprivileged within our communities,” Magaya said.

On Friday, several thousands of people attended the crusade where Magaya introduced what he said was water of life that would substitute his anointing oil.

In an interview with The Standard on the side-lines of the crusade on Friday, Magaya said he would soon take the crusades to other Sadc countries and beyond.

He said it was refreshing to retrace his footsteps to Chitungwiza where he began his ministry years back.

“It has always been my wish from January to come back to my place where we started just to remind ourselves that we are only where we are just because of grace and not because of wisdom,” Magaya said.

“Plans [to move to other areas] are there. Very soon we will be moving to Gweru and most of the plans are of going outside the country starting from April.

“We will go into the Sadc region before we go outside of Africa. We will have a series of tours all over.”

The church has held several crusades outside the country but very few locally.

In 2014, a stampede during a crusade in Kwekwe left 11 people dead while over 40 others were injured.

The PHD leader said he was happy that there was no stampede in Chitungwiza.

He said he took the water of life concept from the book of Revelations.

“God spoke to me a year and half ago and this is just water you pray upon which we then command the voice over. It is a point of conduct to our people which they can use like Jesus used saliva or anything, this is the same concept,” he said.

Prominent Zimdancehall chanter Soul Jah Love, who was prayed for by Magaya recently on his problems with one of his legs, was also present.

Magaya said it was important to dispel rumours that Soul Jah Love’s leg was amputated shortly after he was prayed for.

In response, Jah Love thanked Magaya for the assistance. “I want to thank prophet Magaya. From the time I went to him things started working,” he said.