As part of their social ministry, many religious communities and faith-based organizations have established various programs that offer help and support for children.

Capernaum Trust is a Christian organization established in 1996 by Strive and Tsitsi Masiyiwa to give assistance to orphaned children. It operates in all 10 provinces of Zimbabwe with headquarters in Harare. The Trust transforms previously orphaned children and turns them into History Makers (over 28, 500 so far) through education, training and the realization of their God-given purpose. It also works with over 1, 400 primary and secondary schools and 11 State universities around the country. The Trust operates in 59 out of 73 districts in Zimbabwe.  Capernaum Trust interventions include assisting the children with education scholarships which cover school fees, levies and other related costs needed at school/college; equipping them with spiritual, social and life skills training including career guidance; assisting critically needy beneficiaries with food packs and medical assistance and, providing resource centers and libraries where History Makers access academic and spiritual books and internet resources.

Makumbi Mission Children’s Home is part of a larger Jesuit-run complex (about 60 miles northeast of Harare) that cares for children, aged from newborn up until their 18th birthday. Family-style houses imply that older children take care of their younger peers. The sisters of the Little Children of Our Blessed Lady are in charge of the general management of the village.

Emerald Hill Children’s Home is a home for orphaned and other vulnerable children aged 3 to 20, located in Harare and run by Roman-Catholic Dominican Sisters as part of a larger complex that includes Emerald Hill School for the Deaf.

The Mother of Peace Community is a Catholic lay group in Mutoko which looks after over 150 AIDS orphans (video) and runs a clinic.

Precious Child is a foster home and movement to care for orphans and abandoned babies, established in 2002 by Pastor Charles Masunungure and his wife Judith of the Bindura Family of God Church.

Sunrise Foundation for Hope is a church and community-based organization which caters for orphans and other vulnerable children, especially in the Eastern Highlands of Zimbabwe. It is the social division of the Spiritans, an international Catholic missionary order.

Mustard Seed Communities’ Orphanage in Bulawayo was established in July 2002 to assist with the care of children affected by HIV/AIDS. Mustard Seed has established and maintains four nutrition programs which provide a daily meal to over 500 children who would otherwise go hungry; three pre-schools which accommodate 200 children and provide them with basic education as well as two daily meals.

Zimbabwe Gecko Society is a ministry of the Evangelical Free Church of Canada Missions, or EFCCM. It’s focus is to support widows and orphans in Zimbabwe. All the people involved with the society are volunteers, and 95% of all donations go straight to Zimbabwe.

Jairos Jiri orphanage for children with disabilities at the St. Faith’s Mission. St Faith’s is a rural mission located in Rusape, Zimbabwe, about two and a half hour drive from the capital of Harare. The orphanage currently supports 42 children, ranging from babies to 15-year olds. The orphanage is supported by the mission as well as Jairos Jiri – an organization that advances the interests of people with disabilities. The orphanage has been given 12 acres on the mission property to use for a garden which helps provide food for the children and staff. 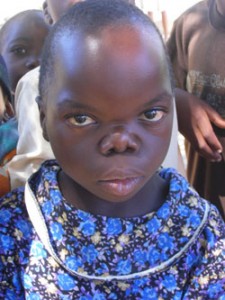 A child from the Jairos Jiri orphanage near Rusape.

Hope for a Child in Christ (HOCIC) is a Zimbabwean interdenominational membership based non-governmental organization founded in 1996 and representing over 25 churches that focus on orphan and vulnerable child (OVC) care and support. HOCIC is in operation in the two districts of Insiza and Gwanda in Matabeleland South Province, Umguza District in Matabeleland North and in five districts of Bulawayo Metropolitan Province.

Hope Center in Mutambara village of Manicaland provides food, clothing and school supplies and keeps 100 orphans in school. Many of them became orphans after their parents had died of HIV. US-based United Methodist Church members helped build the Hope Center.

Khayelihle Children’s Village (KCV) is located about 12 miles outside of Bulawayo’s city center. KCV has five houses and other farm buildings situated on a 270-acre farm.  The houses are home to more than 80 orphaned or abandoned children, their caregivers and farm workers. The children are orphaned primarily because of the AIDS pandemic. The three to five-year-old children attend a pre-school located on the farm and the older children are transported to area schools. Secondary students in their school uniforms. In addition to the residential care, KCV assists children through the Community Orphan Care Programme that cares for just over 100 children who reside in Bulawayo.

River of Life International has a vibrant ministry with kids called Kingdom Ambassadors. The Ministry has over 200 children from all the four assemblies within Bulawayo. It is based on a foundational teaching that developes childrean spiritualy,socialy and mentaly also through the aid of various activities that all children participate in. One of the activities is hospitality ministry, where children take clothing , blankets and food to people in need.

Saint Joseph’s Hostel for Boys is a non-denominational Harare-based institution that looks after disadvantaged boys. It is located in Belvedere and has been operational since 1953. It caters for 55 boys.

Scripture Union is an interdenominational, Christian organisation, which works primarily with the youth. It is active in 130 countries. It was started in England in 1867 and came to Zimbabwe in 1945. The organization principal ministries include: positive peer pressure school clubs, HIV/AIDS Life Skills programs, weekend and holiday camps for primary and secondary school students, distribution of Bibles and other Christian literature, orphan-care and street children projects. Scripture Union also offers Sunday School Teacher training to various Churches. Scripture Union Thutuka is the social arm of the Scripture Union Zimbabwe. It provides shelter, food, medicines, bathing and washing facilities, reunification programs, and psychosocial support to children living on the streets of Bulawayo.

Manhinga Village is an orphanage home, which operates under the auspices of the Apostolic Faith Mission (AFM) Church in Zimbabwe, specifically under the church’s social welfare department. The home is situated 50 kilometres out of Rusape along Nyanga Road where fifty four (54) children are accommodated and another twenty two (22) are at Rufaro High School in Masvingo.

Shungu Dzevana Trust is a private voluntary organisation giving support to orphaned children in the form of institutinal and child fostering. According to their website, they are currently catering for 493 children including dumped babies.

Hand of Mercy (H.O.M.E) is a charity arm of Spirit Embassy.It is currently helping orphans, adults, and children through payment of school fees for more than hundred students from the less-privileged families. Its patron is Beverly Angel.

Glory to Glory is part of George Chikohwa Ministries (GCM) which was started by Pastor George and his wife and helpmate Rose Chikohwa. This is a Harare-based home for children whose parents are dying or died of AIDS.

Araunah Mission Fellowship of Zimbabwe (AMFZ) is a registered Christian non-governmental organisation. Reverend G Chakanyuka founded the organisation in 1997 and it caters for the welfare of more than one thousand (1000) visually impaired people in Zimbabwe. The organisation is located in Harare but has members countrywide.

Chitenderano Children’s Home is situated 40km east of Rusape Town. It was registered in 1993 to accommodate twenty seven 27 children of ages 3-18 years and some old destitute people. It falls under United Christian Crusade Church.

Compassion Ministries is Celebration Church’s social arm. The organisation has two centres, one in Kadoma and the other one in Ivodale and it caters for more than 50 orphans.

Forward in Faith Children’s Home is a faith-based orphanage whose objective is to develop orphaned children spiritually and physically. The institution is situated in Mutare and has twenty seven (27) children. The home is under ZAOGA Church.

St Agnes Gokwe Children’s Home is a home for more than fifty orphans in Gokwe, under the umbrella of the Community of Holy Fire.

Gweru-based Sisters of the Child Jesus (SJI) are running Alfred Walter Hostel as part of their extensive ministries, linked to the The Alois Haene Memorial Centre (AHMC), named after their founder. Alfred Walter Hostel houses more than 72 mentally retarded children who attend school at Ratidzo School, which is adjacent to the hostel. The Sisters of the Child Jesus also administer the Rutendo HIV/AIDS Project for children in Gweru’s Mkoba Township, and they have been seeking to expand their orphan care program through the construction of more houses.

Orphanage in Chivhu (146 km south of Harare). Their team operates from Australia and Zimbabwe. Vana Australia is responsible for providing resources of time, skill and finances to the project, whereas Vana Zimbabwe is responsible for the day-to-day oversight of buildings, staff, and specifically the children’s welfare.The ministry was founded in 2006 by Errol and Donna Spence and Pastor Makoni and Jane Goredema.

Vision for Christ Ministries is a Christian NGO working in rural Goromonzi, where they also maintain an Orphanage.

The Zienzele Foundation has an approach of helping villages achieve self-reliance and care for orphans themselves. This involves projects and small businesses in which orphans and caregivers earn money for basic necessities; paying school fees through sales of hand-made baskets (available online), enabling over 1,000 orphans to gain an education;  workshops and counseling that develop confidence and organizational skills for building a better life.

Thuthuka Street Children’s Project in Bulawayo aims to entice children from the streets to reunify them with their families and assist them to reach their full potential. The project was started by the Scripture Union of Zimbabwe.