RelZim.org articles about the Pentecostal Churches in Zimbabwe

RelZim.org articles about the AIC in Zimbabwe

These churches typically emphasize the “African gifts of the spirit”, including healing. The term “African Initiated Church” (AIC) is used of any of a number of Christian churches started in Africa by Africans and not directly by missionaries from another continent. Often they contrast themselves with the so-called missionary churches and emphasize traditional gender roles and social structures. Most pentecostal churches (with the exception of the Apostolic Faith Mission and Celebration Church) fall into the AIC category.

A variety of overlapping terms exist for these forms of Christianity: African Initiated Churches, African Independent Churches, and African Instituted Churches.  Note: Religion in Zimbabwe uses the term “African Indigenous Churches” for a separate group of churches which almost exclusively target Africans and are often concerned with local customs.

Some large Pentecostal churches or movements include:

Faith Alive assembly is a church of the Apostolic Faith Mission (AFM) in Zimbabwe based in the Adylin section of Westgate in Harare. From humble beginnings with a congregation of less than 12 people,it has since grown to more than 1300 people. AFM Faith Alive church building was officially opened on the 4th of July 2009 by the former President of AFM in Zimbabwe, Reverend Manyika, on a colourful occasion that was attended by believers from different churches, as well AFM leaders from Zimbabwe and South Africa.

The women’s fellowship, named Ruwadzano, wears a blue-red-white uniform revealed in a vision to the founder.  The Church maintains a current website with numerous photos and downloads.

Founded since Zimbabwean independence by Senior Pastors Tom and Bonnie Deuschle from America, Celebration Churches have created a wide network of ministries and enterprises with a contemporary media awareness. There Celebration Churches in Harare, Kadoma, Bulawayo, as well as South Africa.

Christ the Rock Ministries International frequently organises seminars and workshops that are aimed at equipping believers with competence in subjects to do with business and finance from a Christian perspective. It was established in 1998 and has churches in Australia, New Zealand, the United Kingdom, South Africa, Malawi, Zambia and Zimbabwe. CTRMI’s Head ministry office is located in Harare, Zimbabwe.

After more than 20 years of working in the Indian Ocean Islands, Africa, Europe, India, and America, CTMI has united men and women from diverse cultural backgrounds who work together to equip and encourage church leaders. As a result, a growing network, made up of leaders and churches sharing the same vision, has been established in over 22 countries.

A local branch of  the Elim Pentecostal Church founded in Ireland in 1915, Elim Zimbabwe runs a hospital, schools and over 50 churches. Elim is  headed by Pastor Pious Munembe. The Mutare Memorial church, which also houses the Headquarters of Elim Zimbabwe, was built with funds raised following the Vumba massacre. On 23 June 1978, twelve people were slaughtered at the Elim Mission station in the Vumba Mountains, northern Zimbabwe. The first Elim Missionaries to Zimbabwe were Mr and Mrs Jessie Williams who went in February 1949 and were based at Penhalonga, located 18 km north of Mutare.

Faith Ministries is a charismatic, Bible-based ministry with communities in Zimbabwe and the UK. It was started in 1976 by a Scotsman called Alastair Geddes.

Harvest House International Church (HHI) is one of the leading Pentecostal Churches in Southern Africa. It has followers all over Zimbabwe. Outside the region, this Church has believers in Australia, Nigeria and England. Bulawayo community founded in October 1995 with just 8 people is, currently, building a 12,000-seater conference centre for its rapidly-accelerating congregation.

Impact Christian Centre puts emphasis not only on praise and worship and teachings of the word of God, but also on achieving excellence by its members. The Impact Young Executives, is the Church’s Youth Ministry where the ICC looks at how to groom youths to be ladies and gentlemen, as well as future leaders. ICC was founded in 2010 by Pastors Davison and Gwen Kanokanga.

Jubula New Life Covenant Church is a multi-ethnic Harare-based congregation with a large number of cell groups with a leader and a stable cell host. The activities of its 26 churches around Zimbabwe include intercessory prayer, leadership development, economic empowerment, social engagement, evangelism.  Bishop Tudor and Pastor ChiChi became the senior pastors of what was then New Life Temple in 1982. In the years since they have assembled a multi-ethnic, multi-cultural congregation. New Life Temple became New Life Covenant Church in 1998.

River of Life International is affiliated to the Faith Ministries family. River of Life was born on the 17th of December 1999.
After serving with Victory Fellowship under the leadership of the Apostle Kenneth Eric Haskins, Pastor and Prophet Bothwell Tiger Phiri left to fulfill the call of God to start the ministry. 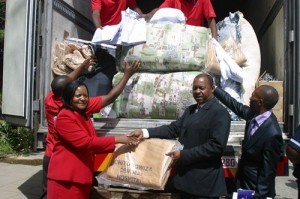 This ministry is one of the fastest-growing in Zimbabwe, largly due to the charisma of their leader. According to the UFIM site, an estimated 17,000 people joined them in 2010 in a period of three months.

Launched in August 2008 as a lunch-hour fellowship at the Anglican Cathedral in Harare, the fellowship was so popular, that after only a week at the cathedral, it moved to the State Lotteries Hall and subsequently to the City Sports Centre.

Zimbabwe Assemblies of God Africa (ZAOGA) is a large Pentecostal church known internationally as Forward in Faith Ministries International (FIFMI). As of 2000, there were 4,000 congregations and 539,683 members. ZAOGA is divided into 26 provinces in Zimbabwe. The movement was founded in the late 1950s by a group of Pentecostals from the Apostolic Faith Mission who gathered around the charismatic Ezekial H. Guti. He continues to lead the church and holds the titles of Dr, Apostle and Archbishop. Zimbabwe is the location of the ZAOGA-FIF headquarters and the host-nation of a number of international gatherings for FIFMI.

ZAOGA has schools in Zimbabwe including Grange Primary School in Chisipite, Denda Primary in Mutoko, Christ for Zimbabwe High School, a children’s home in Mutare, as well as three bible schools in Harare, Chiredzi, and Bulawayo.

According to an article posted on ZAOGA-FIF website in May 2012, “In Waterfalls (a suburb of Harare) the church recently built a state of the art hospital. This medical institution also has a non-medical unit where those with spiritual needs will be ministered to through prayer and the Word.”

The Zimbabwe Ezekiel Guti University (ZEGU) is currently under construction in Bindura on a 100 hectare property.

David Maxwell, in his book African Gifts of the Spirit: Pentecostalism & the Rise of Zimbabwean Transnational Religious Movement, traces the transformation of Ezekiel Guti and his prayer band from small beginnings into the present day transnational enterprise, which is now ZAOGA. See review of this book.