The Catholic Archdiocese of Bulawayo is the second largest diocese in Zimbabwe numbering over 140,000 Catholics (about 8% of the area’s population) grouped in about 40 parishes.  The archdiocese is headed by Archbishop Alexander Thomas Kaliyanil (generally called “Bishop Alex Thomas”) and a large administrative and pastoral team. The seat of the archbishop is the Cathedral of the Immaculate Conception in Bulawayo. The diocesan parishes are staffed by about 30 diocesan priests and 35 priests of religious orders (further statistics).  The archdiocese is home to many missionary groups.

The Archdiocese of Bulawayo operates mostly in two languages: English and Ndebele, the local indigenous language (pdf of Ndebele prayerbook).

The archdiocese is the Metropolitan See for the Ecclesiastical Province of Bulawayo in Zimbabwe. Its official Latin name is Archidioecesis Bulauaiensis in Zimbabua. Suffragan dioceses are Gweru, Hwange, Masvingo.

The Independent Mission of Bulawayo, separated from Salisbury Prefecture, was erected 23 December 1930 and confided to the Mariannhill Missionaries. The Mission was promoted and renamed several times and its boundaries were progressively reduced.  On 10 June 1994, the Diocese of Bulawayo was raised to a Metropolitan See with the Most Rev. Henry E. Karlen, CMM as the first Metropolitan Archbishop of Bulawayo. His successor Archbishop Pius Ncube was particularly active in issues of peace and justice. 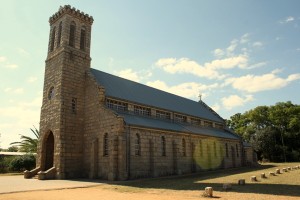 The Archdiocese of Bulawayo includes the first Catholic Mission to be established in Zimbabwe — Empandeni Mission (1887)—and its daughter mission Sacred Heart Embakwe Mission (1902). Like many, each parish has eight outstations, primary and secondary schools and a farm.