In Shona and Ndebele religion, God, or the Supreme Being, is seen as the creator and sustainer of the universe in much the same manner as within Christianity. Shona Mwari (literally “He who is”), or Ndebele uMlimu, is believed to be active in the everyday lives of people. In general, people communicate with Mwari through the vadzimu (Shona), or amadhlozi (Ndebele). These are the deceased ancestors. The vadzimu are believed to constitute an invisible community within the community of the living, always around their descendants, caring for them and participating in their joys and sorrows. Spirit mediums communicate with the vadzimu on behalf of the people. In Shona religion, in addition to the guarding characteristics of the vadzimu, there are also avenging or evil spirits, ngozi, and witches who communicate with them.

In Karanga indigenous religion in Zimbabwe: health and well-being, Prof. Tabona Shoko analyses the traditional Karanga views of the causes of illness and disease, mechanisms of diagnosis at their disposal and the methods they use to restore health, Shoko discusses the views of a specific African Independent Church of the Apostolic tradition. The book finds that the centrality of health and well-being is not only confined to traditional religion but reflects its adaptive potential in new religious systems manifest in the phenomenon of Independent Churches.

Zimbabwe’s Education Ministry recommended the teaching of African Traditional Religion in schools in recognition of its multi-religious society. One study (abstract) revealed that the teaching of this subject faces challenges in primary schools. 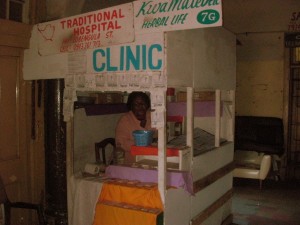 Traditional medicine is the source of primary care for many  Zimbabweans. N’angas (traditional healers)are consulted for their political and religious powers along with their healing powers.The Zimbabwe National Traditional Healers Association (ZINATHA)  is officially recognized by the government and has a constitution along with departments of education and research. Each of the approximately 55,000 members pays annual dues.  ZINATHA officials estimated that 80 percent of the population consult traditional healers during the year.

Herbal remedies are used. Most n’angas say they are possessed by a healing spirit which they invoke while treating the patient. Research was done on 30 n’angas from 7 suburbs of Harare that were interviewed personally at their place of practice in 1987.  More stories.

A 2006 amendment to the colonial Witchcraft Suppression Act (WSA) criminalized witchcraft practices only if intended to cause harm. Under this new framework, spoken words alone would no longer be considered a witchcraft practice or evidence of illegal activity. ZINATHA welcomed the amendment for differentiating negative witchcraft from traditional beliefs and enabling traditional healers to operate more openly, without fear of either witch hunters or prosecution. ZINATHA also stated that the amendment would facilitate the prosecution of unlicensed traditional healers. Examples of African traditional religion or philosophy in Zimbabwe include:

The Mwali hilltop cult and shrines is discussed in the 2008 book Mambo Hills: Historical and Religious Significance by Marieke Clarke (reviews). Mambo Hills is northeast of Bulawayo. —  Njelele Shrine, 35km south of Bulawayo in the Matobo Hills, is the most famous place of pilgrimage and rain dances for the traditional Mwali spirit. Every year towards the beginning of the rainy season, Chief Hobodo, as the custodian of Kalanga religion and customs, sends a delegation of amawosana (people with rain-making spirits) to the Njelele Shrine to go and ask for some rains from Mwali (a spirit speaking from a rock in Njelele) on behalf of the community. (stories).

Recent studies of the rain cult include:

“The Marumbi Rain cult: Gender and the interface between rainmaking and the politics of water in Gutu” by Joseph Mujere of the U. of Zimbabwe (pdf).

“Women and Ecology in Shona Religion” by Isabel Mukonyora of the Univ. of Zimbabwe (pdf)

Unhu (equivalent to Zulu “Ubuntu”) is a humanist philosophy often summarized as “I am what I am because of who we all are.” There is an Unhu facebook page.

Religion of the San

The religion of the San people, or Bushmen, of southern Africa consists of a spirit world and our material world. To enter the spirit world, trancing has to be initiated by a shaman through the hunting of Power animal. In Zimbabwe, San religious concepts are similar to those of South Africa, however the eland is replaced by the elephant and other animals. The San religious art of Zimbabwe and South Africa can be linked strongly to neuropsychological findings in trance.