University of Zimbabwe — Department of Religious Studies, Classics, and Philosophy

University of Zimbabwe has a Catholic chaplaincy and several Christian student groups. 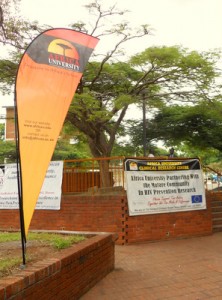 Africa University (AU) in Mutare is a private, higher education institution that was founded by the United Methodist Church (UMC) in March 1992. A total of 1200 full-time students are enrolled annually. For the 2010-2011 academic year, the student population is comprised of 1098 students from 27 countries; 49.6% women and 50.4% men; there are 75 full-time lecturers as well as a number of part-time and visiting lecturers.  Like the student body, faculty members at AU come from across sub-Saharan Africa.

The Catholic University in Zimbabwe is the only Catholic university in the country. As of 2010, there were over 300 students in the two faculties: the Faculty of Business Management and Information Technology and the Faculty of Humanities. The proportion of men to women is about 50:50 at the University.  The Catholic University in Zimbabwe was established in 1998 at the initiative of a group of lay Catholics and the Archbishop of Harare, the Most Rev. Patrick Fani Chakaipa. On 25 February 1999, the University opened its doors to 41 students reading for the Bachelor of Business Management and Information Technology (Honours) Degree. In August 2000, the Bachelor of Arts Degree was added.

The Reformed Church University in Masvingo is funded by the Reformed Church in Zimbabwe. The church established more than 500 schools in the southern part of Zimbabwe where its largest mission, Morgenster, is. (In early 2000, the church established the Great Zimbabwe University which collapsed due to several operational constraints.) The RCU is offering various degree programmes in the faculties of Commerce, Education and Theology/Religious Studies. The university opened its doors to the first group of students in August 2012.

The Catholic society of NUST (currently 100 members) was formed in the 1990s soon after the establishment of the university. This society falls under the broader National Movement of Catholic Students in Zimbabwe. The NUST Catholic Society members occasionally meet with their counterparts from Hillside Teacher’s College and Bulawayo Polytechnic College and regularly organise prayer retreats. This society convenes for Bible sharing at the university’s main campus every week from Monday to Friday between 12:15 and 1pm, which is the lunch time for students and academic staff at the institution. It is also during those meetings that members discuss their challenges and offer each other relevant solutions. On Thursdays, the students attend Mass at 4:15 at the Electronics Building celebrated by their chaplain, Fr Charles Nabwenye (OMI) while on Sundays those residing in the suburbs adjacent to the university go for the Eucharistic Celebration presided over by Fr Tadeusz Grenda (SVD), at the SVD Provincial house in Riverside.

NOTE: Chief Pastor and founder of Assemblies of God Africa (ZAOGA) Ezekiel Guti announced in December 2010 that he has been awarded a licence to build a large university in Harare, which would be known as the Zimbabwe Ezekiel Guti University (ZEGU). See a video about the construction of ZEGU in Bindura.