For information on the international organizations that provide help in many categories including healthcare, for example, Anglican Relief & Development in Zimbabwe (ARDeZ), Caritas Zimbabwe, World Vision International (Zimbabwe), see the general page on Social Ministry. Other general organizations are:

G. Spagnolli Centre for the Health and Promotion of Women provides quality care and support for poor people affected by HIV/AIDS in Harare and surrounding areas, to help empower the local community to deal with the AIDS pandemic with compassion and dedication. Beneficiaries include 400 mothers, 30 men and 24 children. It is an interdenominational non-profit run by the Sisters of Charity, in conjunction with Dr. Carlo Spagnolli.

The Islamic Medical Association of Zimbabwe (IMAZ) has the objective of alleviating the plight and suffering of people who needed medical assistance (2006-09 report).

The Zimbabwe Red Cross Society offers unique humanitarian services through its programmes which include the Integrated Community based HIV and AIDS programme, Water and Sanitation, Food Security and Livelihoods, Restoration of Family Links and Disaster preparedness and management. With a volunteer base of over 44,000 volunteers countrywide, the National Society is rendering humanitarian assistance to over 54, 000 orphans and other vulnerable children and more than 20 000 home based care clients.

The Zimbabwe Association of Church-related Hospitals (ZACH) was founded in 1974 and is the medical arm of Christian churches in Zimbabwe. ZACH operations are conducted on the principles of strict ecumenism. The Association is accountable to the Heads of Christian Denominations (HOCD) in regard the running of Church Health Institutions /Hospitals.

Ve’ahavta, Jewish humanitarian and relief committee, has worked in Zimbabwe since 1998. Ve’ahavta has implemented two CIDA-based (Canadian International Development Agency) medical research based projects focusing on reducing the transmission of HIV/AIDS from mother to child. Ve’ahavta continues to facilitate volunteer placements at the Salvation Army Howard Hospital (although as of August 2012 the hospital’s future is uncertain), as well as work with partner agencies to provide medical supplies and equipment. Ve’ahavta has provided over $1,000,000 in aid to Zimbabwe.

The UNICEF award-winning J.F. Kapnek Trust – Zimbabwe and the J.F. Kapnek Trust – U.S.  together operate the largest  pediatric HIV/AIDS transmission prevention program  in Zimbabwe serving approximately 900 birthing centers and 200,000 pregnant women.  Through testing, training, counseling, education, and delivery of medications, they are preventing more than 15,000 new cases of pediatric HIV/AIDS each year. The organizations also support thousands of orphans, vulnerable and disabled children through its programs in preschools, school fees and scholarships.

Youth Alive Zimbabwe is a faith-based organisation in Mutare dedicated to bringing about an AIDS-free generation through workshops, programmes and activities which address behaviour and values and empower participants with life skills and character formation training.

Christ’s Hope International (CHI), a non-denominational, African-based ministry, is working towards an AIDS free world by bringing the hope of Jesus Christ to those infected with and affected by HIV/AIDS. This includes people in danger of contracting HIV, those suffering from AIDS, their care-givers, and at-risk children whose parents have died due to AIDS.  Christ’s Hope International was founded in early 2003, and has many active Ministry Countries in central and southern Africa (including Zimbabwe), Mobilisation Countries in Europe and North America, and pioneering efforts are currently under way in several other nations. CHI sponsors a charity called Ride for Hope Coast to Coast. It is an evangelical charity that brings food and other necessaries to Africa’s needy, and also preaches Christianity to those it feeds.

The role of religious groups in encouraging or discouraging vaccination has been studied by the World Health Organization and statisticians.

This is the Zimbabwean chapter of the International Network of Religious Leaders Living with or personally affected by HIV and AIDS (Inerela). Formerly known as Zinerela+, it was pioneered by Pastor Maxwell Kapachawo  in 2004 and officially launched in December 2005. Today the organisation operates in eight provinces in the country. The local chapter is now headed by Reverend Zvidzai Chiponda from the Evangelical Lutheran Church. Inerela+Zimbabwe is situated at 83 Central Avenue in Harare.

The largest contribution of religious groups to healthcare is through the founding and operation of hospitals both in towns and in rural mission areas.  For the early years, see the article, “Medical Missions: A Neglected Theme in Zimbabwe’s History, 1893-1957“, by C. J. Zvobgo, Zambezia 13 (1986).

Block is currently caring for 26 underprivileged elderly men and women in Bulawayo. They are being served by the faithful of Selborne Park Christian Church, member of a fellowship of churches Church Team Ministries International.

Bonda Mission Hospital is an Anglican Mission Hospital situated in the Eastern Highlands region of Zimbabwe, near the Mozambican border. The hospital has 200 beds with 100 staff. Attached to the hospital is a nursing school that takes up to 20 students per year. On the same compound is also a secondary school, a primary school, a church and a convent with an orphanage.

Chidamoyo Christian Hospital (with a current blog is a well-equipped 80-bed hospital located about 50 miles from the town of Karoi in northern Zimbabwe.  It is a Church of Christ/Christian Church sponsored mission hospital that works under the government health program in Zimbabwe to serve a patient population of about 70,000 people. It is partially supported by the Chidamoyo Trust. The hospital was featured in a 2010 New York Times article.

Chikombedzi Mission Hospital is located in the south-east region of Chiredzi (Masvingo province). It is sponsored by the Free Methodist Church. (1998 Dental outreach report). 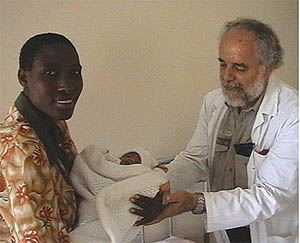 Makonde Christian Hospital serves a patient population of 55,000 in northern Zimbabwe near the former copper mining town of Mhangura. This former mine hospital was purchased to run as a mission hospital in January 2001. It is partially supported by the Chidamoyo Trust.

Mater Dei Hospital is a large modern hospital in Bulawayo run by the Franciscan Missionaries of the Divine Motherhood since 1950.

Mbuma Mission Hospital is a community hospital in Mbuma, a remote village within Nkayi District, Matabeleland North (province). It is owned and operated by the Free Presbyterian Church of Scotland and largely funded by the Dutch ‘Mbuma Mission Foundation’.

Murambinda Mission Hospital, situated about 215km south-east of Harare, provides healthcare in the Buhera area. It has an active friends association, and was featured in a 2011 article.

Mashoko Christian Hospital is a 120-bed hospital that sees 60,000 patients each year. The mission was originally established by New Zealand Church of Christ missionaries in the early 1930’s and “the gospel is taught to both the inpatients and the outpatients by hospital chaplains as well as by nurses.” Mashoko also has a Nursing School with dormitory.

Morgenster Mission Hospital is a Reformed Church care center which covers a population of around 200,000; the home based care programme covers 60,000.

Mtshabezi Mission Hospital near Bulawayo is the main Brethren in Christ Church mission hospital in Zimbabwe.

Mutambara Mission Hospital in Nhedziwa, Manicaland is supported by the United Methodist Church. Regular newsletters describe their activity ( 2010DC pdf and 2010B pdf).

The Mutemwa Settlement northeast of Harare cares for 40 leprosy and 20 destitute/handicapped patients. The John Bradburne Memorial Society supports the Settlement in Zimbabwe in memory of the 10 years John Bradburne spent working there, until his tragic death in 1979.The Nhowe Mission Brian Lemons Memorial Hospital is a 32-bed hospital sponsored by the East Point Church of Christ, and several church members spend time there each year. The mission includes a school and a home for children as well.

Nyadire UMC Hospital is part of the Nyadire Mission supported by the United Methodist Church.

Old Mutare Hospital is supported by the United Methodist Church.

Rusitu Mission Hospital is a 65-bed primary-care mission hospital in the eastern highlands of Zimbabwe.

The St John Association of Zimbabwe is an affiliate of the Most Venerable Order of the Hospital of Saint John of Jerusalem in Zimbabwe. The first St John Centre was formed in 1925 in Bulawayo to meet the needs of railway staff for first aid training. Their mission is to prevent and relieve sickness and injury and to act to enhance the health and well being of people of all races and creeds in Zimbabwe. The head office of St John Zimbabwe is in Harare.  Two functioning centres operate from Bulawayo and Mutare.

St Albert’s Mission Hospital in Mashonaland Central Province serves a 3,000 sq km (1,800 sq mi) area, with a population in 2006 of 120,000. It resides on the edge of the Zambezi escarpment near the Mozambique border, and serves people in the surrounding villages and those living below in the poorer, dryer, malaria-ridden Zambezi Valley. Both areas continue to grow as people migrate from cities to the rural areas because of Zimbabwe’s declining economy.

The hospital opened in 1964 with 85 beds. It was originally run by Dominican nun nurses. Elizabeth Tarira, MD, MPH, a Zimbabwean, was the hospital’s first resident doctor. She arrived in 1983 and gradually built up the hospital to the 140-bed capacity. Elizabeth became the hospital’s director in 1999. She is also District Medical Officer for the region and oversees the operation of ten outlying village clinics. St Albert’s became a district hospital in 1985. In August 2012, Prophet Makandiwa‘s church-supported program Operation Restore Sight  helped 103 patients.

Tshelanyemba Mission Hospital is a Salvation Army clinic in Maphisa, Matabeleland South. In response to the HIV/AIDS pandemic Tshelanyemba offers HIV testing and counselling, community outreach and education, support groups for those living with HIV/AIDS and the training of home-based care volunteers and community-based peer volunteers. They also have a program specifically targeting the orphans.

The Celebration Church has a department called Celebration Health which meets health needs and conducts medical outreaches to the less privileged members of the community. The Church is assisted by doctors who are its members and are well-versed with the vision of the church. People are treated free of charge and regardless of their different church affiliations.