RelZim.org articles about Judaism in Zimbabwe

The Zimbabwe Jewish Community is part of a greater grouping African Jewish Congress, whose spiritual leader and executive director is Rabbi Moshe Silberhaft. It once numbered 7,000 but now has only a few hundred members.

Jewish settlement dates back to the the beginning of the 20th century and, in some respects, parallels that of South Africa. Today more than two-thirds of the community’s members are 65 or older. Most of the young people have left for South Africa, Israel, or elsewhere. The communities in Midlands no longer exist.

Communal centers exist in both Harare and Bulawayo. The Zimbabwe Jewish Board of Deputies is the leading communal organization. There are two synagogues in Harare: Ashkenazi and Sephardi and another in Bulawayo Ashkenazi Orthodox. The Central African Zionist Organization is the Zionist umbrella body that was established in 1898 in Bulawayo. Despite the small number of youth, several Zionist youth organizations are active. The two Jewish schools, Carmel in Bulawayo and Sharon in Harare, have a large enrollment of African and Indian pupils. As of January 2007, Sharon had ten Jewish learners in a total pupil body of 200, while Carmel School had just four. 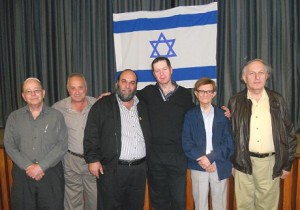 Bulawayo has a home for the elderly, Savyon Lodge, and various benevolent and welfare committees. There are currently about 70 Jews in Bulawayo. However, not all of them are practicing. The figure used to be 3,000 45 years ago.

In May 2011, Rabbi Moshe Silberhaft visited Harare to oversee the distribution of medication, as well as Israeli foods, brought across from South Africa. Rabbi Silberhaft and David Millard, a Christian Zionist activist for Israel who accompanied him to Harare, then addressed the audience.

All funds raised for Zimbabwe Jewry, both in South Africa and internationally, are channelled through the African Jewish Congress Zimbabwe Fund (AJCZF), which assists over 160 needy Zimbabwean Jews with food parcels, rent and medication, etc. While donations from South Africa comprise a significant component of the AJCZF’s budget, overseas contributions, including from the American Joint Distribution Committee and Chai South Africa in the US, were assuming increasing importance as of 2008.

Ve’ahavta, Jewish humanitarian and relief committee, has worked in Zimbabwe since 1998, including in partnership with Salvation Army‘s Howard Hospital. Ve’ahavta has provided over $1,000,000 in aid to Zimbabwe.

As Ve’ahavta’s representative, Sarah Zelcer has managed projects in Zimbabwe among other countries, since early 2000s. She can be reached on [email protected].

Here you can find an overview of Zimbabwe’s Jewish Architecture.

Lemba may have Jewish ancestry

Genetic tests carried out by British scientists suggest that some of the Lemba tribesmen in southern Africa have Jewish origins. The Lemba, a tribe of 70,000 to 80,000 members who live in central Zimbabwe and northern South Africa, have customs which are similar to Jewish ones.

The Lemba tribe in Southern Africa, including Zimbabwe, have customs that suggest Jewish roots.

Lemba refrain from eating pork or other foods forbidden by the Torah, or forbidden combinations of permitted foods, wear yarmulke-like skull caps, conduct ritual animal slaughter, have a holy day once a week, and even put a Star of David on their gravestones.

According to their oral tradition, the Lemba are descended from seven Jewish men who left Israel 2,500 years ago and married African women. The Lemba prefer their children to marry other Lembas, and marriage to non-Lembas is being discouraged. Despite their roots, many of the tribe are now Christians or Muslims.

See article Zimbabwe’s ‘Black Jews’ Observe Traditions, if Not Faith to learn more about the Lemba.

This claim has been most strongly advanced by Tudor Parfitt.