RelZim.org articles about the AIC in Zimbabwe.

This page on “African Indigenous Churches” surveys those churches which are aimed almost exclusively at African converts, use local traditions more extensively, and have a healing focus on African issues like barrenness and bewitchment. Some have pentecostal components but some do not (e.g. the Independent African Church).

Varying estimates of African indigenous churches in Zimbabwe can be found, ranging from 10% to 20% of the total population, in which they sometimes hold to one or more African tribal belief systems syncretised with Christianity.  Although a substantial portion of the Zimbabwean population today belongs to a Christian congregation or church, people retain many of the traditional customs and beliefs in traditional religion such as Shona or Ndebele religions. After Independence, Zimbabwe’s constitutional freedom of religion and worship guarantees the freedom to once again practice traditional religions.

The largest African Indigenous Churches are:

One of the Zionist group of churches, the Zion Christian Church was founded in the 1920s by Engenas Lekganyane of South Africa and Samuel Mutendi of Zimbabwe. It is now being run separately with Bishop Nehemiah Mutendi, son of Samuel Mutendi, heading the Zimbabwe chapter. As of 2000 there were 1,389 congregations and 166,667 members; perhaps 500,000 people were affiliated with the church. The Zimbabwe chapter now has congregations in Botswana, Lesotho, Mozambique, Namibia, South Africa, the United Kingdom, the United States and Zambia. 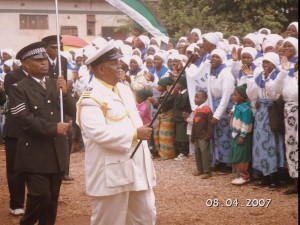 In the early 1900s, Zionist missionaries went to South Africa from the USA, and established congregations. They emphasised divine healing, abstention from pork, and the wearing of white robes. The Zionist missionaries were followed by Pentecostal ones, whose teaching was concentrated on spiritual gifts and baptism in the Holy Spirit, with speaking in tongues as the initial evidence of this.  The Zion Christian Church is one of the churches that have been called Messianic for they focus in on the power and sanctity of their prophetic leaders, but it has a rather loose structure. Church members make an annual pilgrimage to Defe (in Gokwe in the Midlands Province) to mark the day and resting place of Samuel Mutendi who died on 20 July 1976.

Bishop Nehemiah Mutendi has built 10 schools, four primary and six secondary schools, and is planning to build a technical and vocational training centre. The ZCC’s Mbungo Church and Conference Centre east of Masvingo has a capacity of 15 000, making it one of the biggest in Africa. It cost an estimated US$2 million and was opened in 2010 by Pres. Mugabe.

Owing to leadership wrangles the Church split into two formations. Members of the larger faction wear a badge with green and black colours and a star image on their clothes, while the representatives of the smaller group have since replaced the star with a dove image. Notwithstanding this, the doctrines of both formations remain the same.

The ZCC Mbungu Church in Masvingo, though seemingly big in Zimbabwe, is one of the smaller splinter groups under the leadership of Bishop Mutendi. The other splinter group in Bikita is said to be led by Bishop Jorum.

Both of the major sects of Vapostori were founded in 1932 in eastern Zimbabwe by similar prophets, Johane Masowe (1915-1973) and Johane Maranke (1912-1963) (pdf with history and description)(photos). Both groups now extend to nearby countries.

The Maranke group is the largest AIC in Zimbabwe. As of 2000 there were 500 congregations and 364,000 members; 910,000 people were affiliated with the church. It vies with the Zion Christian Church and the Roman Catholic Church for the greatest number of affiliates in the country. Their UK group’s website on Mapostori includes history, prophecies and audio.

By comparison, the Masowe group in Zimbabwe is small, numbering 55,000 in the main Gospel of God Church in Zimbabwe in 1995. But at the time of his death in 1973, the number of Masowe VaPostori exceeded half a million people in nine nations of southern, central, and east Africa. The website of the Kenya branch explains their mission and beliefs more fully. Emerging from their tradition of being closed, their UK congregation now advertises itself on the internet. 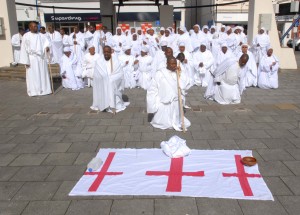 The Friday Apostles pictured in Broadway during their prayers.

VaPostori are a curious blend of African Traditional Religion and Christianity with Old Testament practices being prominent. They take on some symbols and practices of Judaism (forbid pork, alcohol, and tobacco, Saturday kept as Sabbath) as well as emphasizing faith healing and prophecy. Robert Reese’s study of the VaPostori (pdf) further explains: “The VaPostori stand out because of their distinctive look: their women are clad in white dresses and scarves and the men shave their heads and let their beards grow… They set up “shop” along busy thoroughfares to attract customers to buy their homemade wares such as baskets, crocheted items, metal containers, and wooden furniture.” Like Maranke’s followers. the Masowe Vapostori hold meetings outdoors ‘in the wilderness’ but unlike the Maranke Vapostori they allow children to be vaccinated and to attend school. Reese continues: “The VaPostori are a closed community. When I asked the difference between the VaPostori of Masowe and Maranke, the reply was that the followers of Masowe are not permitted to work for anyone outside their own group. Thus a Masowe disciple is required to learn a trade by which he or she can contribute to the welfare of the group; any other work is unacceptable.”

A recent book on the Masowe Apostles is Isabel Mukonyora, Wandering a Gendered Wilderness: Suffering and Healing in an African Initiated Church (Peter Lang, 2007), reviewed at Gladys Ganiel’s blog (with comments by Masowe adherents).

Mugodhi Apostolic Church is active in Zimbabwe and South Africa.

The African Apostolic Church was established in the 1950s by Ernest Paul Mwazha, after a series of revelations on the mountain of Guvambwa in Chikomba District. Mwazha continues to serve as the leader of this international, faith-healing church of apostolics and is now titled Archbishop.   The church in the UK diaspora has eight branches under the direction of Bishop Wellingtone G. Kusema (essay).  As a result, men and women dressed in white robes can be found praying in the hills around London.

As of 1995 there were 50 congregations and 3,000 members; 9,000 people were affiliated with this church. There has been controversy about its leader Bruce Grant Chitanda.

Christian Marching Church
The Christian Marching Church (CMC) now has some 53 assembly points in Zimbabwe and has opened up assembly points in Zambia, Malawi, Mozambique and United Kingdom. The Church currently has Church Halls in Gweru, Bulawayo, Harare, Zengeza, Tafara and is in the process of building 5 more. The Church was founded on 30th June 1956 at Harare (now Mbare), in Salisbury (now Harare) Zimbabwe, by a group of nineteen men and women. The group guided by its motto “Love Thy Neighbour” chose a committee. While the ordination of the first leader, Peter Petros Katsande, was carried out by Rev. Bates and Rev. Machingura of the African Independent Church, the ordination of the others was carried out by Rev. Peter Petros Katsande. Since 2000, Bishop Tendayi Bunyani Katsande has been the current head of the Church.

The Church’s social ministry projects include the Ida Wekwako Old Aged Home in Dombotombo, Marondera; opened in 1984, it can accommodate some 65 residents. The Church received assistance from Government and donors to establish the home. The name of the home is derived from the Church’s motto, “Love thy neighbour”. At Ameva  an interdenominational Bible school was established, so was a poultry, diary and beef projects. A primary and secondary school were constructed at Ameva to cater for the children from the Chegutu farming area.

The church was founded in 1954 and has grown into a successful indigenous church with branches across the country. Current mayor of Bulawayo, Thaba Moyo, is a member of this church. Holy Messenger Amai Juliet Chamoto is leader of the Guta RaMwari Church.

Guta raJehovah (English: City of Jehovah, also known as City of God) is a church based in Zvimba, approximately one hundred miles from the capital Harare. The Church was founded in 1954 by Mai Chaza’, a faith healer with Methodist roots, and continued in reduced form after her death in 1960. Her burial shrine was the subject of dispute by followers in 2009.  Her movement has been particularly studied by those interested in gender and religion (See academic research by Timothy Scarnecchia and Dube). (abstract)

Ziwezano Church was started with former USA Methodists around 1960. As of 1995, there were 15 congregations and 2000 members; 5000 people were affiliated.