Religion in Zimbabwe‘s 2012 estimate of religious identity in Zimbabwe is: 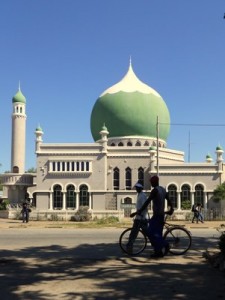 A mosque in Kwekwe

Percentages are based mainly on the 2010-11 demographic survey.  The government does not require registration of religious groups. These affiliations assume a population of 12 million. Due to emigration during the recent years of crisis, estimates of the nation’s current population vary between 11 and 13 million.

Estimates particularly vary about how much of the population is syncretic (mixing Christian beliefs with indigenous beliefs). There are few Zimbabweans who have not encountered Christianity in some form, but many Christians also associate themselves with traditional practices on occasion.  Some Christians have multiple membership.

The major Christian communities and movements in Zimbabwe are:

Organizations that gather the major Protestant Churches are:

— the Zimbabwe Christian Alliance (ZCA) is a faith-based organization whose mission is to bring about social transformation in Zimbabwe through prophetic action.

The Zimbabwe Catholic Bishops Conference (ZCBC), the ZCC and EFZ sometimes issue statements together under the title of “Heads of  Christian Denominations in Zimbabwe”. RelZim.org articles about ZCBC.

In western part of Zimbabwe, there is an umbrella organization called “Churches of Bulawayo” that operates under the leadership of Elphas Mpofu.

A recent survey of Christian groups can be found in Munetsi Ruzivo, “A Mapping of the Church Groups in Zimbabwe”, The Role of the Church in the Struggle for Democratic Change in Zimbabwe (2008), 4-14. (pdf).