The prophets of Baal are here 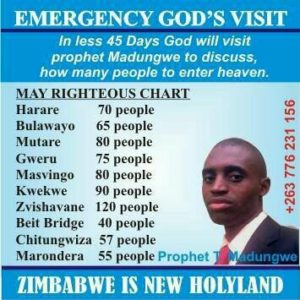 1 Kings 18:40 reads, “Then Elijah commanded, ‘Seize all the prophets of Baal. Don’t let a single one escape!’ So the people seized them all, and Elijah took them down to the Kishon Valley and killed them there.”

Elijah killed 400 fake prophets that day because they had offended the Lord. One wonders how many would be killed if Elijah were to walk through Africa today. Is this new breed of prophets that has taken the continent by storm serving the Lord or their own interests, is a pertinent question of the day.

These hundreds of youthful and charismatic prophets in pointy shoes and shiny suits concentrate on what is called the prosperity gospel, performing all manner of “miracles” – some of them bordering on nothing short of the absurd, such as telling people their vehicle license plate numbers.

How does “prophesying” a vehicle number plate help advance Christianity?

Evidently this has nothing to do with advancing the teachings of Christianity and can only be described as a fata morgana, a mirage that has no substance. What has been happening since the turn of the millennium resonates well with Mathew 24:11, which warns that in the last days many prophets will rise and deceive people with lies, signs and wonders.

In recent months we have seen it all: “prophets” making people eat grass, church leaders selling “anointed condoms”, so-called men of God walking on congregants, and followers drinking sewage and being told that a higher power makes it palatable. And now we have Pastor Paul Sanyangore of Victory World International, who says he talks to God on his mobile phone.

Evidently, good old prayer is no longer good enough and God has moved with the times and waits eagerly with millions of people around the world for Apple and Samsung to unveil their latest smartphones!

Even disc jockey Tichafa Matambanadzo aka Tich Mataz says he spoke to God on the phone courtesy of Pr Sanyangore who says he has an Almighty phone number on his contacts list. (We wonder, is the contact saved as “God”, “Jehovah”, “Yahweh” or, like urban youths are wont to say, “Mudhara God”?)

Not to be outdone is Pr Jonathan Mthwethwa, a Zimbabwean based in South Africa: he tried to walk on water and was feasted on by three three crocodiles.

Could that be classified as a holy meal?

One congregant, Deacon Nkosi, said about this divine providence for the crocs, “The pastor taught us about faith on Sunday last week. He promised he would demonstrate his faith to us today, but he unfortunately ended up drowning and getting eaten by three large crocodiles in front of us. We still don’t understand how this happened because he fasted and prayed the whole week. They finished him in a couple of minutes. “All that was left of him when they finished eating him is a pair of sandals and his underwear floating above the water.”

Perhaps the congregation, like Elijah throwing barbs at Baal’s prophets, should have prayed harder and sang louder because maybe their god was sleeping or attending to other business as the leviathans did what nature intended of them. A church many people would want to attend is Louzolo Amour in Congo’s Pointe Noire.

Well, no one can begrudge them believing the Almighty is represented on Earth by Guy Emile Loufoua Cetikouabo. Others believe that the Bishop of Rome, the Pope, is “Vicarius Christi”.

Anyway, Mikoungui Loundou – who communes with Louzolo Amour – says: “What we want to share with the world is that we found a person who has the three characteristics of God – omnipresent, omnipotent and omniscient. That man is Guy Emile loufoua Cetikouabo. He was born without a navel, and that defies science.”

The story cannot be complete without mentioning Harare’s Prophet Talent Madungwe, who claims that he has been to Heaven and he is number four in the divine hierarchy, ranking only lower than the Trinity of the Father, the Son and the Holy Spirit. He says the angels Michael and Gabriel rank beneath him; never mind that anyone who has half-read the Bible knows Michael and the Son are the same. And Prophet Madungwe also tells us that Heaven (which he has visited more than once) is like New York City. Does this mean the builders of New York City down in the United States had inspiration of a four-square city paved with gold?

Elijah would have his work cut out were he to stroll through our churches today.