January 9, 2012 , published in In the Churches Blog   by Mandla Tshuma

Despite one‘s religious orientation, annual contributions of money and grain towards the Njelele Shrine pilgrimage are compulsory in Hobodo community in Mangwe district of Matabeleland South Province. 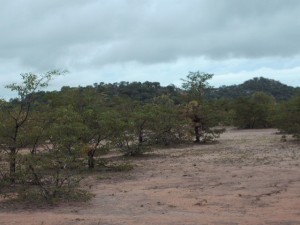 Every year towards the beginning of the rainy season in the month of August or September, Chief Hobodo, as the custodian of Kalanga religion and customs, sends a delegation of amawosana (people with rain-making spirits) to the Matopo hills-situated Njelele Shrine to go and ask for some rains from Ngwali (a spirit speaking from a rock in Njelele) on behalf of the community.

Before the departure of the high-powered delegation comprising omathobela, as the amawosana are affectionately known, and senior village elders and heads, each family contributes money for the trip and grain to feed delegates during the normally week-long pilgrimage.

In August last year ahead of the current rainy season, now in full swing, all homesteads from the four villages of Mswiliswili, Gulumane, Tegwane and Dayintambo contributed 10 South African rand and some grain each towards the sacred trip.

In separate interviews, villagers, who are members of different churches, said there are no negotiations when it comes to the chief’s directives, adding that supporting the pilgrimage does not necessarily mean that they believe in the power of the shrine but they are merely observing traditional laws of the land.

When the amawosana return home from the pilgrimage, traditional beer is brewed at different sections of the community falling under different village heads and then taken to Chief Hobodo’s homestead ahead of the beginning of a four-day rain-making ceremony. The ceremony, annually held at eDaka Shrine at the bank of Sanzukwi River by the chief’s homestead, is usually attended by thousands who come and cheer at amawosana as they dance.

The cycle continues until the forth day of officially closing the ceremony after which rains would immediately outpour to erase the omathobela’s foot prints.

Notwithstanding the Njelele pilgrimage and other traditional religious rites the Kalanga people are involved in, almost 90 % of villagers are members of different Christian churches such as the Roman Catholic Church, Zion Christian Church, Holy Apostolic Church of Zion, Twelve Disciples, Twelve Apostles and other apostolic sects.

One villager, however, complained that cohabitating of Hobodo villagers with both Christianity and African traditional religion has created a religious crisis as there are now Christened inyangas.