reprinted from The Jewish Chronicle

Rabbi Moshe Silberhaft, affectionately known as “The Travelling Rabbi”, seems to recoil when he is asked if he ever dreams of being a conventional community leader. “No… I’m not a pulpit rabbi,” he insists. “I’m an on-the-ground, hands-on, ceremonial rabbi… and I’m as comfortable officiating weddings as exhuming cemeteries.” 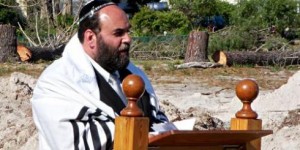 Silberhaft is the African Jewish Congress‘s “country community” head and spiritual leader to small congregations within sub-Saharan Africa. As such, he has the largest congregation on the continent – 3,000 Jews in communities that stretch from Kenya to Cape Town and from Kinshasa to Madagascar.

He divides his time between travelling up and down Africa – thousands of miles each year – and working out of his office in Johannesburg. When The Jewish Chronicle caught up with him, he had just returned from a few days with the tiny Jewish community of Mauritius and was about to jet off to Cape Town. Exotic locations they may be, but they cut little ice with Silberhaft.

“It makes no difference where I go,” he says, shrugging his shoulders. “People often ask me where my favourite destination is, but there isn’t one. For me there is no difference between Zimbabwe and Mauritius – it’s the people that count.”

The sentiment appears genuine. Silberhaft has an almost pathological desire to serve far-flung living communities and to physically commemorate the dead ones. For him, both jobs are vital for preserving Jewish identity and legacy. Where roads and buildings in remote corners of Africa were once named after prominent local Jews, he petitions to preserve them, or at least lay a plaque honouring their memory.

“Eighty years ago, the average resident in any small African town knew what a Jew was, and more importantly, what he represented in a civic and business sense. Today, most residents have no clue what a Jew is.”

Jewish urbanisation and migration has diminished provincial communities in southern Africa. As the second generation of Jewish settlers moved to the cities, relatively few were left behind.

Silberhaft passionately believes that local people need to know what Jews did for this region. “They uplifted the population around them, building schools and educating the wider community,” he says.

For the Jews who remain, whether in Gaborone or Windhoek, Graaff-Reinet or Lusaka, Silberhaft is the only link to a wider culture and heritage. “To arrive in a small town with a Jewish newspaper, a jar of gefilte fish or a box of matzah on Pesach, there is more appreciation than when a Jewish city slicker receives the greatest Yom Kippur honour at the most prestigious of synagogues,” he says. “The visits show that they have not been forgotten.” 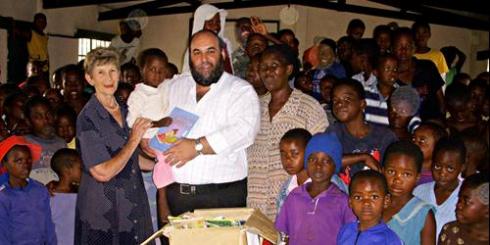 Rabbi Silberhaft in Bulawayo where he has helped to set up a library for the orphans of AIDS victims.

So what is it that made Silbehaft navigate pot-holed African roads instead of communal politics? A single child born in Jerusalem, his parents moved to South Africa when he was five, to care for a sick grandparent. A religious upbringing was cemented at Yeshiva College in Johannesburg, where as a teenager he was often sent out to small communities to help make a minyan.

He remembers the tail-end of the provincial Jewish heyday in southern Africa with nostalgia. “There was no real need for a rabbi to officiate then, as many Jews of Lithuanian descent were knowledgeable in Jewish rites. We were just there to make up the numbers.”

After college, he was conscripted into the South African Defence Force (SADF), where he served as a chaplain to fellow Jewish soldiers. With the army, he travelled to the farthest regions of the apartheid regime’s dubious proxy wars including a six-month stint in the jungles of what is now the Namibian-Angolan border.

Ending his service in 1989, he went to Israel to start his rabbinical training, missing the release of Nelson Mandela from prison but returning in time to vote in South Africa’s first truly democratic election.

In November 1993, he was named as the seventh head of the Country Communities department, within the South African Jewish Board of Deputies. Soon after, he completed his rabbinical training, and earned the nickname of the “travelling rabbi” when a documentary was made about him with that title. He revels in the soubriquet, wearing a baseball cap emblazoned with the words and using it on his business cards and e-mail address.

As an Orthodox minister, his views on denominations and intermarriage are what might be termed non-traditional, but he recognises that in his area of work, it helps to be pragmatic – although he bats away the suggestion that the smaller communities are more prone to intermarriage. “Quite the opposite in fact,” he says. “In my experience, Jews living in small communities are far more aware of their upbringing and conscious of their Judaism.” As a result they have lower levels of assimilation than large Jewish centres.

And when community members do marry outside of Judaism? “I treat them no differently,” he says. “There is absolutely no discrimination from my office. They, and their partners and children, are welcome to a synagogue service or events I officiate just the same.”

Silbehaft does not see the logic in driving un-observant Jews away from Jewish life. He will not officiate at mixed weddings, or conduct non-religious ceremonies, but he has good relations with the South African Progressive and Reform communities. If someone in Lesotho needs a Liberal rabbi, he will do all he can to get one there.

His multi-denominational outlook spills over into his dealings with the wider community too. The diminishing and near destitute Jewish community in Zimbabwe still finds the time and resources to help others that are not so fortunate. An entire generation of Zimbabweans has been smitten by HIV/AIDS, leaving countless orphans in the care of their grandparents. Silberhaft has supported the local Jewish community in establishing a library and resource centre specifically for those children. Thousands of books have been donated from Australia, and money raised from the United States.

There are, of course, downsides to being the travelling rabbi, not least because the African landscape can at times hold dangers all of its own. In April, Silberhaft was attacked by killer bees in Harare while taking a Shabbat walk between the Ashkenazi and Sephardi synagogues. He suffered 87 stings on his head and back, was rushed to hospital and administered adrenaline.

The extreme poverty in the region also plays its part – the rabbi has recently been overseeing the exhumation and relocating of bodies from a Jewish cemetery in a small town because an adjacent squatter camp was encroaching onto the graves.

From the continent’s poorest to its most powerful – Silberhaft has good relations with figures in many African governments. His office wall is crammed with photographs of him with various dignitaries. He recalls each meeting with an anecdote.

The Kenyan Foreign Minister publicly stated that he owed himself to the Jews, as his father could afford to educate him as a result of getting a better job after agricultural training in Israel.

“And you see that one, with the Zambian Minister of Education? Well, he has made Holocaust education compulsory in the Zambian curriculum after attending this year’s memorial day with me.”

Silberhaft has also been honoured for his role as Jewish lifeline. In 2009 he received the Commonwealth Jewish Council and Trust Anniversary Award from London Mayor Boris Johnson for his “dedication and service”.

And during a visit to Buckingham Palace in 1999, the Queen observed that “she had never met a young rabbi with such great responsibilities”.

He would not have it any other way – apart from the killer bees, that is.

One Response to Moshe Silberhaft, the Travelling Rabbi