reprinted from the Kennebec Journal by Paul Koenig, with minor additions

The Rev. Tsitsi Nakoma Moyo sat at a table in her office, looking down at her Dunkin’ Donuts coffee while she slid the cup between her hands. 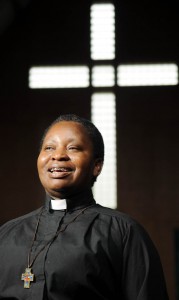 She talked about her family, her faith, feminism and sweet potatoes, but mostly about her journey to two small Maine churches in the USA by way of Massachusetts and Zimbabwe.

Moyo, 47, her black hair cut short with only a couple of spirals of gray at her temples, said her life is a miracle. But not in the sappy, every-life-is-a-miracle way that’s probably penned on the inside of a Hallmark card somewhere.

“A miracle has to happen for me to survive,” she said.

Moyo grew up with nine siblings — eight brothers and one sister — and her mother and father in Zimbabwe. Her father was a polygamist and had about 25 children, she guessed. Her household, like the rest of Zimbabwe, she said, heavily favored males over females in every facet of life other than child rearing.

Moyo vividly remembers an instance as a 10-year-old that drove home her place in society in comparison to her brothers’.

Moyo said she still thinks back to this incident as an example of how she would never be considered as important as a male in Zimbabwe.

“There are just small, little things that happen in your childhood and stick with you, and they either destroy you or encourage you,” she said.

“If I would argue, I could be beaten, and she didn’t want her daughter to be beaten,” she added.

Moyo dropped out of school after the seventh grade at the age of 14, not by choice, but because her father didn’t think she needed any more education as a female. She said her father believed that educated women either don’t get married or are rude and “insubordinate” to their husbands. She married her now ex-husband at the age of 16.

By the time she was 24 years old, they had four daughters. Moyo said they had the children close together because she was pressured to have a son instead of another girl. But she prayed it wouldn’t happen.

“If I have a boy, how are my daughters going to be treated in the family?” she asked herself. “I didn’t want them growing up to be second-class in their own home. I experienced that in my family, and I didn’t want them to experience that. I guess God answered my prayers. I never had a boy.”

Moyo said she didn’t want her daughters to be denied the same education that her father denied her. “I swore by God that my kids would not go through what I went through,” she said.

In order to ensure her daughters were educated, Moyo said, she felt she had to educate herself first. This meant completing the three levels of education she missed after her father pulled her out of school in the seventh grade.

She said she spent the next three years teaching herself, cramming in six years of school and examinations while still raising her four daughters.

“I had to do everything before my kids got older and needed more attention,” she said. Moyo would send them off to school in the morning and do housework while they were gone. After the kids returned from school, Moyo would send them out to play while she slept. She would wake up to prepare dinner, feed her daughters, bathe them and put them to bed.

“And then I would start reading. I would read throughout the whole night,” she said. The next day she would do it all again.

Moyo completed the necessary schooling in those three years, barely passing the exams, she said. Afterward, she said, her husband wanted her to go into teaching or nursing, but she instead went to a seminary to become a pastor to fulfill a promise she said she made to God.

“I made a bargain with God. I said, ‘God if you see me through my studies, I’ll save you for the rest of my life.’ And the fact that I did six years work in three years, I feel like God answered my prayers,” she said.

Moyo served as a pastor in Zimbabwe for 2 1/2 years before moving to the United States to continue her education at Boston University, where she has earned three master’s degrees, in sacred theology, social work and theological studies. Her daughters and now ex-husband joined her in the U.S. a year and a half later.

Moyo now has only her dissertation left to complete her doctorate of ministry at Andover Newton Theological School in Newton, Mass. For her dissertation, she’s creating a framework for pastors to work with women in Zimbabwean prisons, especially with women imprisoned for domestic violence offenses. Moyo said women in Zimbabwe often can’t find work after being released from prison. The goal is to help bridge the gap between the woman and her family after the crime and look at what other issues may have led to the crime.

Although Moyo moved to America in hopes of providing her daughters with greater education and a brighter future, she said she still struggles with the guilt she felt about leaving them behind in her home country without her.

“I feel like when I left them in Zimbabwe and came here, I exposed them to all sorts of things that could have happened to them,” she said. “And I struggled with that for a very long time, with the guilt that I pursued education more than be with my kids.

But Moyo, even with her voice cracking, said she knows her daughters were able to achieve much more here than they ever would have in their home country. Three of her daughters also have master’s degrees in social work, and the fourth is on her way to the degree. Still, Moyo said, she grieves over the culture and family connections her daughters lost.

“That part of their life is gone. It’s totally gone. Even if they go home, it’s more like they’re visitors. They’re not going to enjoy the family like I had enjoyed my family growing up,” she said.

One of Moyo’s brothers usually lives with her in the Randolph parish house, although right now he is staying in New Hampshire for work, she said. One of her daughters and her daughter’s two sons also live there. Moyo said she tries to talk to at least one of her family members still living in Zimbabwe each day, usually using Facebook or Skype. She also visits her mother each year and is planning her next trip for February.

But Moyo always has a reminder of her family with her. Four black-stud earrings in her right ear represent her daughters, while the nine up her left ear are for her siblings, she said, turning her head to each side.

Members of her two churches have also grown closer to Moyo, which she said is one difference between the churches she served in Massachusetts and the Maine churches. Some of the congregations in Randolph and Pittston try to make themselves more part of her life, she said, by visiting her and inviting her family to their homes.

Congregation members said Moyo’s weekly sermons are often powerful and thought-provoking. They said Moyo connects well with her audience — even if her accent is occasionally difficult to understand.

“She’s change, she’s different, but I can relate to her,” said Jane Hubert, 66, of East Pittston. She said Moyo is skilled at bringing sermons down to a personal level.

“Her sermons are very direct, and they have a lot of depth,” Work said.

Work also spoke well of the pastor as a person, saying Moyo’s love of people often shows through. “She’s a loving and caring person, and I feel privileged to call her a friend,” Work said.