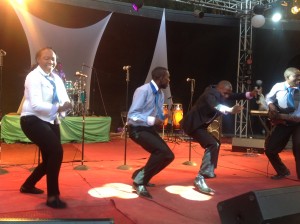 Mathias Mhere and his band The Saints of God performs at the Fifth edition of the Open Heavens Gospel Crusade held at Harare Gardens on Saturday (M. Chibaya).

The question of whether or not it is advisable for people to dance in church, or whether or not praise music that allows dancing has any value in it among today’s Christians is one that continues to linger in many people’s minds.

One aspect of this is the idea that dancing is usually a result of some entertaining music where people dance to express their excitement or enjoyment of the music.

But looking at dancing more closely reveals how it is used by different cultures the world over to communicate different aspects of socio-cultural and religious values than mere enjoyment of music.

In most churches dancing is used during praise and worship as a tool for expression of delight and joy in the Lord.

There aspects of a people’s culture are revealed in how worshippers dance to the sound of the drum or any other musical instrument as they conduct their worship services during church or church-related activities.

For this reason one is likely to see in some churches in different cultures around the world dances such as rhumba, kwasa kwasa, jazz, ballet, break dance, hip- hop and many others which are used together with gospel music.

However, although many of these dancing styles have been accepted in some cultures, in others they have been flatly condemned.

In those cultures where certain styles of dancing are forbidden together with their accompanying music, there dancing and music are constant subjects of controversy among Christians.

But looking at dancing generally, there is clear evidence that it occupies a huge part of our lives. Whether used in church, at funerals, during celebrations or social gatherings where there is music, one notices that people just love to dance.

The fact that dancing encourages social cohesion, expression of delight, emotional therapy for some and that it helps people communicate various aspects of their socio-cultural and religious lives makes it a very important social activity among people the world over.

However, in the Christian Bible, there are several chapters where we also learn about dancing and how it was used for different purposes.

One such story is that of King David in 2 Samuel 6 where he danced in front of his people until he attracted his wife’s rebuke. 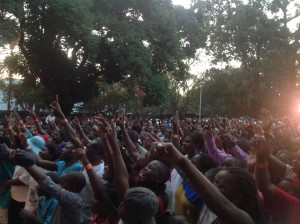 The conclusion of the story was that his wife, Michal, was punished by God for her words of reproach and scorn when she criticised her husband for his actions. According to 2 Samuel 6:23, she could not get pregnant from that time until her death.

Elsewhere, in Exodus 32 there is a part where dancing was used in the context of idol worship resulting in sin being committed by Israelites.

In this chapter, the Israelites committed a sin against God by dancing and singing celebration songs to a golden calf, which according to God’s Ten Commandments had been an act of idolatry.

In 1 Samuel 18 dancing is also mentioned where women sang and danced in celebration of David’s heroic exploits in war against Philistine. According to 1 Samuel 18:7, they composed a song and danced to it saying David had killed more enemy soldiers than the then King Saul.

After that Saul became angry with their dancing and singing since by doing so his subjects were simply communicating a message that they had now shifted their admiration to David instead of himself.

Looking at these stories and many others one wonders what lesson there is to learn about dancing and its role in the church today. In the story of David’s dancing before earning his wife’s rebuke, it is clear that the main message on that chapter was not about dancing itself but that as God’s children we should freely express our heartfelt joy and gratitude to God alone.

When David’s wife was punished by God for rebuking her husband, what really attracted God’s anger against her was not her disapproval of dancing itself but the fact that she held husband’s profile as more important than his public expression of humility and heartfelt joy and gratitude before his God.

David’s dancing was directed at God while that of Israelites in Exodus 32 had been directed at the golden calf or idol god erected by Aaron, one of their then leaders, in compliance with their demands.

In life, if dancing were to be used in celebration of material properties other than God alone, such dancing would be idolatrous, sinful and abominable before God.

Apart from that, dancing will continue to be an important feature of people’s socio-cultural and religious lives. When applied in today’s church, aspects such as how people praise and worship, how they grieve their dead loved ones, how they celebrate happy moments in life such as weddings or birthdays, are usually communicated through dancing and music. 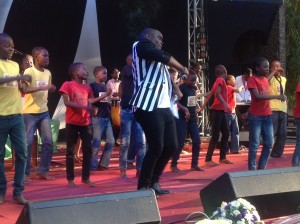 Above all, dancing should not seek to promote anything else other than it being a form of free expression of joy, reverence, worship and celebration of God’s goodness.