The unrelenting economic crises in most African states have created a fertile ground for the exploitation of gullible yet innocent people who, instead of focusing on the God of men, are focusing on the ‘men of GOD.’ 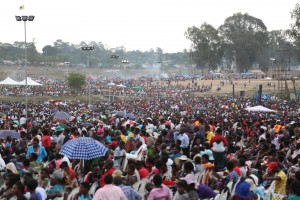 Part of the 350 000 people from Zimbabwe and across who attended PHD’s all night prayer in Harare recently (photo: M Chibaya)

DAYS after the deaths of eleven people in a stampede at the Prophetic Healing and Deliverance ministries (PHD) crusade at Mbizo Stadium in Kwekwe, there are still no established facts to make way for an inquest as provided for by the law in any violent death.

The eleven people died painful deaths being trampled upon by hundreds of feet. A loss of eleven souls is no child-play and the anger that has followed the tragedy is understandable. Blame continues to be thrown around but what remains clear is that the sad occurrence might not be the last if no meaningful investigations and preventive action is taken in future.

What further intensifies the conundrum is the fact that the police have distanced themselves from an earlier report suggesting that they had fired teargas resulting in the commotion. Such disasters are, understandably, synonymous with teargas commotion but questions naturally follow given the circumstances. We all remain at a loss as to what triggered the deaths of these innocent souls.

This disaster comes barely two months after scores of South Africans and Zimbabweans lost their lives in Nigeria at the collapse of a building belonging to TB Joshua’s church. In Kwekwe, the stadium which, supposedly, has a carrying capacity of 7 000 was packed to the brim, with about 15 000 people having converged in the hope of receiving miracles.

The unrelenting economic crises in most African states have created a fertile ground for the exploitation of gullible yet innocent people who, instead of focusing on the God of men, are focusing on the ‘men of GOD.’ Desperation has turned people to seek outrageous solutions as they seek to ameliorate the suffering.

Despite the huge hopes placed on prosperity and prophetic movements, results on the ground show that this manipulative gospel only enriches its founders and those who seat at the top echelons of these supremely organized institutions.

Does it not provoke anger that people are made to believe that they are suffering because of some mythical curse in their lives and that they have to pay a sacrifice to be ‘delivered’? One Pastor Neshamba wrote, “The marl performance of economies has formed a formidable partnership with these prosperity and miracle churches.” Multitudes which throng these churches are longsuffering people drawn by the lure of miracles. One frequently hears of miracle-jobs, miracle-money and even miracle-babies which have persuaded even the most devout Christians to leave their traditional churches.

In an apparent show of concern, even the President recently highlighted the need for Zimbabweans to be wary of churches motivated by avarice which are marked by an emphasis on wealth. There is a clear adulteration of the Gospel seen through a myopic focus on miracles; scarcely do these organizations teach people of salvation and the Christ’s Second Coming.

The same churches have continued to promise the all-believing laity of a never-coming prosperity: “The Lord is setting Zimbabwe free” we have heard. “Divine solutions are coming and gold will be picked from the ground,” some have said. Andyet the sobering truth, which is the opposite of such promises, is bare for all to see.

Sometime in April, during the famed Judgment Night, it was prophesied that Zimbabwe was set for economic boom. PHD also affirmed this position at its record all-night prayer. But the stinging truth must be told: God never intended miracles to replace the natural order of things. God’s design is that a woman carries pregnancy for nine months. God’s design is that people should work for a living. God’s design is that a human being, whether good or evil, will, someday, fall sick and die; these are natural processes set up by the Creator himself after the fall of man.

Today, we have youths whose minds have been poisoned to think that money will visit their pockets while they sit in a stadium ;we have people who believe that simply because someone clad in a shiny suit claims that the economy will boom, it shall be so. We have people willing to subject themselves to innate dangers in foreign lands in the belief that some miracle will change their lives. To this end, sad to say, in a space of two months we have lost many souls. And yet the economy remains in a tailspin; a glance at the country’s GDP tells a story of an economy gasping for breath.

It remains sad and paradoxical that while people are willing to give everything they have in pursuit of miracles they are, instead, meeting with death. True worship, my dear friends, is not about miracles or seeking wealth but seeking God in truth and spirit (Matt 6:33).