February 8, 2012 , published in In the Churches Blog   by Sindiso Moyo 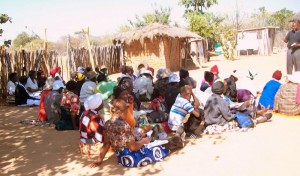 Local churches based in Bidi area demonstrated unity in the body of Christ when they came together to form the union, the first of its kind to incorporate all existing Churches in the area. BCU was formed in August 2011 and has a membership of 23 local churches that include Roman Catholic, African Baptist, and Zion Christian Church among others.

In an interview the leader of BCU Mr. Michael Ndlovu of African Baptist Church said, “Bidi Christian Union was formed after realising that churches have a bigger role in the development and transformation of communities through proper channels in a Godly manner. We are a non-sectarian union that aims to advance the spiritual, social, economic, intellectual, moral interest of Bidi community. As a union we urge everyone, especially the young, to be part of this project.”

He added the union has many things to offer such as setting up a vocational training centre for the local youths who have not done well their school to do income-generating projects such as sewing, building, agriculture, dress making, carpentry, poultry and building.

Mlindeli Mpofu, who is a spiritual development officer for a local NGO, assisted the union in coming up with a constitution and registration. “The idea of forming a union which will include all the existing churches came after realising that a lot young people lose hope after failing their “O” levels. Many of those youths fall into stealing and prostitution as a way of surviving while others go to South Africa and Botswana to seek employment,” explained Mpofu.

The MP for the area Mr. Gabriel Ndebele is one of the influential personalities who have been instrumental in the formation of the Christian Union after he was approached by church leaders to help them formalise the operations.

“As a Christian union we have not ignored local community structures, we work with the Chief and the MP for Bidi constituency Mr. Gabriel Ndebele and the Senator  Ms. Mlotshwa [who] have been of great assistance in the setting up of the union”, explained Mpofu.