The Commercialism of Christmas – It’s Not All Bad 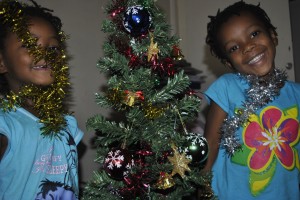 Festive cheer has gripped the streets of Harare and with only 1 day left till Christmas, the excitement in most parts of the city seems to be contagious.

This year I bought my children a Christmas tree and true to the age-old tradition, we all helped to decorate our newest acquisition with a variety of brightly coloured accessories. As my daughters draped the green, gold, red and silver tinsel onto the branches of our miniature tree, their faces lit up with absolute delight and glee. As I watched my 2 little girls (one is 4years old and the other 5 ½ years old) shriek for joy and occasionally jump up and down, I realized why Christmas had become so commercialized. As I watched them hang up gold-glittered stars and small golden bells, I knew that despite the frivolous nature of my purchases, they were worth each and every cent because of the joy they brought to my children.

Before I had kids, I told myself that I when I become a parent I would not allow my children to be consumed by the massive media machine which indoctrinates the world into thinking that Christmas is about big spending, big gifts and big advertising.  After having children I managed to hold the same views and for the past few years I only ever bought them gifts and made elaborate Christmas breakfasts, lunches and dinners. Now, however, my children are much older and they have become dual victims of consumerism and peer pressure. The past month has made for uncomfortable television viewing for me, as almost every Christmas advert resulted in me being interrogated on ‘what we are getting for Christmas’. Last week we visited a friend of mine, and the minute my children laid eyes on her Christmas tree, I knew gifts would not suffice this year.

About a month ago we had our first Christmas tree incident in OK Five Avenue. We were standing in a queue next to a very inviting Christmas tree and naturally my children were drawn to the big, bright tree. I allowed them to go and take a closer look and assuming that all was well, I left them at the tree when my queue began to move forward. However just as I started getting served at the counter, I heard a muffled thud and turned around to see my guilty-faced toddlers standing beside the fallen tree. I rushed to pick up the tree and gather the scattered decorations before rebuking the little girls as we returned to the counter. My embarrassment was overcome with guilt as I realized my children were merely excited about the novelty that I had denied them for all these years. When we visited my friend’s place last week, the same excitement gripped them, when they saw a Christmas tree in her lounge. As they happily surveyed the decorations and complimented the tree, my heart melted. All my anti-commercialism sentiment was washed away in an instant and for the first time since their births, I wanted my children to enjoy the magic that Christmas has to offer.

Two days later I came home with a Christmas tree and I can’t even begin to describe the jubilation that met me at the door. As we set up the tree and unpacked the decorations I discovered that this was an experience I had been lovingly keeping from my precious little girls. Yet here I was I enjoying it every step of the way. When they asked me about their Christmas presents I told them they would wake up to find them under the tree on Christmas morning. At this point, they informed me that it was Father Christmas who would bring their presents, but unfortunately for them I decided that was more Christmas cheer than I could put up with. I gently told them that Father Christmas is not real and that he is just a character in stories. I went on to tell them that presents are bought by mommies and daddies from the shops. I genuinely hope that bursting their bubble was the right thing to do, but I feel accepting simple realities like that should be part of a child’s development. In my head, it doesn’t make sense to tell a lie that you are going to retract in a few years time.

With all things said and done, I am proud of myself for abandoning my selfish stance and allowing my children an opportunity to enjoy the festivities that come with Christmas. For the first time in my children’s lives they are going to wake up to an array of colourfully wrapped gifts sitting under our cute little tree. I am so excited for them and I have been counting down the days till I get to see their little faces glow, as they unwrap their different presents. Despite my standing belief that the commercialism of this season has created artificial pressure on parents in particular and on society as a whole, I also realize that no dollar value can be put on the absolute bliss that Christmas brings for children. It is for their sake that I intend to make this and all other Christmas celebrations going forward, a memorable experience during which they can enjoy a day of bright lights, cheerfulness and laughter.