Welcoming the stranger and challenging others, even leaders in my faith community, to do the same 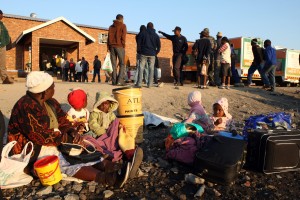 South Africa / Urban refugees / Zimbabwean refugees queue early in the morning outside the Musina Refugee Reception Centre. Approximately 350 refugees get temporary asylum (known colloquially as \”Aslam\”) each day. It can take up to 3 days to be processed. / UNHCR / JAMES OATWAY / 11 August 2009

“A core value of my faith is to welcome the stranger, the refugee, the internally displaced, the other. ..I will challenge others, even leaders in my faith community, to do the same,” begins joint declaration “Welcoming the Stranger: Affirmations for Faith Leaders”  that the UN Refugee Agency (UNHCR) and representatives of 25 faith-based NGOs signed in Geneva earlier this month. The aim is to strengthen protection for the world’s more than 40 million refugees, internally displaced, and stateless people.

As this country is getting each day deeper involved in the debate over the looming presidential elections, it’s worthwhile to remind my fellow Zimbabweans of those who still lack any basic right to have a stake in contributing to the development of Zimbabwe, namely the stateless people. And there are still lots of them, despite the recent improvements made possible by the new Constitution.

An estimated 12 million people worldwide, according to UNHCR, are not recognized by any state as its citizens. According to Sergio Calle-Norena, deputy regional representative for UNHCR, laws allowing for only one nationality and the denial of citizenship to certain groups are the main causes of statelessness in the Southern Africa region.

In Zimbabwe.. following an amendment to the citizenship act passed in 2001, individuals with dual nationality were given six months to renounce their foreign citizenship or lose their Zimbabwean nationality. The new law affected countless Zimbabweans whose parents had migrated to the country from Zambia, Mozambique or Malawi at a time when white-owned farms and mines offered plentiful employment. Most did not, in fact, hold citizenship in their parents’ countries, making it impossible for them to renounce it, while many were simply unaware of the new law..

South Africa / Urban refugees / Conwell Nsinga (16) of Gwanda in southern Zimbabwe, plays soccer at the Boy’s Shelter in Nancefield, Musina. The shelter houses in excess of 200 boys aged 16 and under. Many boys must share beds. Most of the boys crossed the border unaccompanied by adults. They are given food, shelter and lessons here. / UNHCR / JAMES OATWAY / 10 August 2009

Organizations like Christian Care have strengthened the government’s capacity to provide civil status documents and improved access to registration by Persons of Concern to UNHCR through renovating the Jotsholo Registry in Matabeleland North. Of the 11,500 pieces of Civil Status Documentation obtained by persons of concern in this area between 2011-2012, 52 per cent were for women. Previously, many people, particularly women and girls, were at risk of de facto statelessness and were unable to exercise their rights as citizens.

Despite other political issues being in the spotlight these days it is important that members of various religious-oriented development groups active in Zimbabwe use the Welcoming the Stranger declaration as a guiding principle, give resonance to it by bringing it to the forefront of media discussions, inspire others to follow.

The occasion is ripe — the World Refugee Day will be celebrated this week on June 20 — and some of the top faith umbrella institutions present in Zimbabwe adhered to the declaration. Among these were the Lutheran World Federation, Jesuit Refugee Service, World Council of Churches, World Evangelical Alliance and World Vision International, top Anglican, Muslim, Jewish and Hindu groups.

What the satanist refugees story teaches us