reprinted with abridgements and minor additions from Wicked Local, Lexington, by Marc Filippino 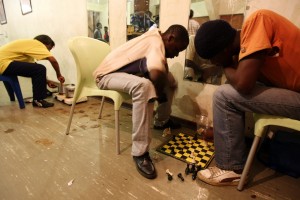 South Africa / Urban refugees / Boys play chess, while a woman cooks. The Central Methodist Church in central Johannesburg provides shelter to in excess of 3,800 Zimbabwean refugees. People sleep wherever they can find a surface to lie. / UNHCR / JAMES OATWAY / 6 August 2009

After a career shift from the development sector to journalism and other writing, Lexington [Massachusetts, USA] native Christa Kuljian decided to focus an investigation on one of the main centers of South Africa’s immigrant population.

Her novel, Sanctuary, explores the role of the Central Methodist Church in Johannesburg, South Africa, in aiding immigrants [most of from neighboring Zimbabwe] from other countries adapt. Kuljian explores the uplifting stories and the controversy that swirls around the church, which at one point harbored roughly 4,000 immigrants.

How did you make the decision to make the move into nonfiction writing?
I had worked in development for many years and was the director for C.S. Mott Foundation for 11 years. My work was in the realm of South Africa and the issues here. When I left the Mott Foundation in 2003, I wanted to do more writing on the issues I had been working on and write about them in a different way. 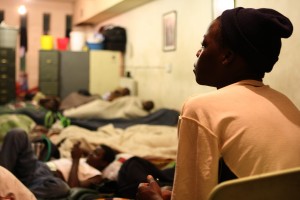 I had been writing memos and reports with bullet points for decades and as an avid reader and wanted to write in a more engaging way with a broader audience. I pursued and was accepted into the masters creative writing program at Wits University.
The xenophobic concerns that grew in 2008 put Central Methodist Church in the headlines and brought to my attention the role it was playing in the city. I was accepted in a journalism grant to study and work on the story behind this church.
Many have compared Central Methodists’s involvement in immigration to that of Ellis Island’s role in American immigration.
Do you find this to be an accurate representation?
It’s a tenuous comparison. Valid, but tenuous. Ellis Island [immigrants] legally came into the country to get documentation. Central Methodist Church was not a government run program; it was an unofficial. Ellis Island was government sanction. The church hosted people in Johannesburg, mostly from Zimbabwe, who had nowhere else to stay. [Bold by RelZim] They were primarily from Zimbabwe, because of the political and xenophobic crisis.
The characteristic of Central Methodist to Ellis Island is somewhat correct more of a haven for people from struggling countries. But the church is more of a stepping stone for people to seek refuge before moving on and making a new life.
What was the importance of the church for the immigrants?
At first it was primarily a place of accommodation as a place for people to sleep. Other organizations started coming in. A Médecins Sans Frontières (the French equivalent to Doctors Without Borders) opened a clinic at the church.
Organizations came in to see food was provided. The church opened up a school for refugee children to provide education.
Some employers would come to the church to find skilled trades people. People leaving Zimbabwe due to the political circumstances came into Johannesburg with skills. [Bold by RelZim] Many were plumbers or teachers. So in those ways the presence of the church provided a range of support.
How was this story controversial in Johannesburg?
At some points there were 3,000 people in the church and 1,000 outside on the street. It was very crowded. When you have that many people to house, you run into issues. The neighbors were not happy with some of these issues.
Many attorneys set up in the area and were not happy with the situation. They took the church and the city to court to find other accommodations for these people.
In many instances, I told the story of a particular person as a narrative to reflect a larger issue. Many people related a story of violence against women, which was central in the book. I tried to tell the story of violence, which was not a very easy to tell.
In many ways, this sounds like the plotline from the science fiction movie District 9 (2009), which tells the story of Johannesburg residents trying to extricate aliens from their city. Is this movie a metaphor for the current immigration situation?
District 9 was inspired by the events of May 2008 and the xenophobic violence in Zimbabwe. [Bold by RelZim. Probably here the author means xenophobic attacks against Zimbabweans in South Africa] The director [Neill Blomkamp] was making a comment on what happens when you have people termed “aliens” in your country. Are they welcomed or are they placed in special camps? Are they integrated or not? It is a theme that runs throughout the movie and that runs throughout Sanctuary.
See related reading