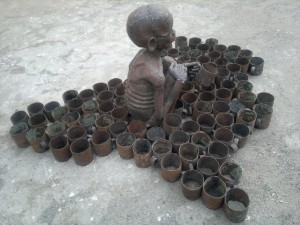 Through his art, NAMA award-winner Israel Israel is critiquing socio-political issues such as Africa’s poverty and its perpetual begging from Western countries.

The devoted Christian of the Assemblies of God has dedicated his life to expressing himself through art, which he believes is a calling from God.

Israel, who won the three dimensional award at the recently held NAMA awards in Bulawayo, told RelZim that his award-winning piece -“Unto us a Child was Born, Unto us a Child was Given”, portrays poverty in Africa which has become a vicious cycle.

The piece shows a thin boy holding a cup, sitting in a map shaped like Africa made out of begging bowls. The bowls are never filled due to the dependency syndrome that Africa has on the West.

“The African continent continues to beg from the West which makes the continent the one with the highest number of NGOs than any other continent in the world,” Israel said.

“This shows that if one cup is filled while the other bowls are not filled it means that the continent remains poor and always in need of foreign aid,” he said.

The sculptor-cum-musician said that the title of the piece, taken from Isaiah chapter 9, depicts how the dependency syndrome has crippled Africa.

He said there is need of mind-set realignment in order for Africa to remove itself from the shackles of poverty which has gripped it for years.

The dreadlocked metal artiste, who is resident at the National Gallery in Bulawayo, also created a piece called “Facebook” in 2011.

The artwork, which he describes as neo-pollution, tackles the effects of Facebook on school children. The piece portrays the everyday life of a school child whose interest in studying diminishes due to the social network.

“I am saying be wary of Facebook and how it has affected society. This is a new form of pollution which is packaged in a somewhat attractive, but potentially dangerous, manner,” Israel said.

Through “Facebook”, Israel strives to awaken the community to the negative effects of excessive use of technology.

The soft-spoken artiste is set to showcase his products alongside Gweru based NAMA-winner Phoebes Mushipe as part of his plans of widening his market.

However, he bemoaned the low demand for his products on the market.

“The market is not as vibrant as it used to be. Business is very low these days, unlike in the past when we could buy houses and cars from selling our products,” Israel said.

Israel is also a musician, with a slant towards Gospel mbira music of which he recorded an album with the hit song Ofana Naye. The song praises and worships the Lord whom he says is incomparable to any other creature on earth.