reprinted with additions and corrections from The Standard

‘Diesel n’anga’  Nomatter Tagarira, alias Rotina Mavhunga, who made headlines in 2007 after misleading President Robert Mugabe and other prominent Zanu -PF politicians that she had 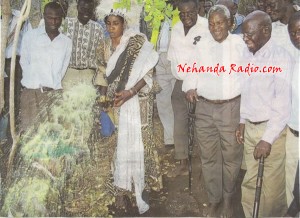 Over four years ago, ‘diesel n’anga’ Rotina Mavhunga fooled Zimbabwean officials into believing she could conjure pure diesel from rocks in Chinhoyi. 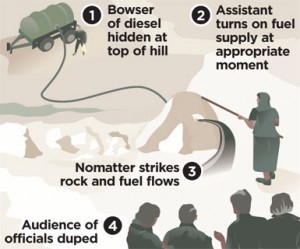 powers to extract diesel from a rock, was recently released from prison and is now a Christian. An official at Chinhoyi Prison identified as Chaplain Ngulube confirmed Mavhunga’s release on March 29 this year.

“Indeed she is now a converted believer and is attending AFM church after our preaching sessions at the prison,” said Ngulube. “She has asked for prayers to strengthen her as she doesn’t want to be associated with other witchdoctors who may want to harm her.”

Mavhunga was sentenced in 2010 to 27 months in prison for defrauding the state and misrepresenting to government officials that petroleum was oozing from a rock at Maningwa Hills in Chinhoyi. High-ranking cabinet ministers at the time formed a special committee tasked by President Robert Mugabe to look into the diesel find. These were the Minister of Defence, Sydney Sekeramayi, Minister of Home Affairs, Kembo Mohadi and Security Minister, Didymus Mutasa.

However, Mavhunga at the time told the enthralled ministers that she was under instruction from the spirit of one “Sekuru Dombo” to discover more wealth that could help the country out of the economic challenges. Mavhunga’s aides duped the ministers by using a pipe lodged between rocks at the summit of Maningwa Hills to pour diesel down where the ministers were gathered to witness the “spectacular” event. The committee reported back that she was indeed able to produce fuel out of a granite rock. A second mission sent by Mugabe expressed doubts about the miraculous diesel flowing from the rocks, and she subsequently went on the run before she was arrested.

The Zanu-PF government planned to use the diesel and gold findings to boost the country’s national wealth. Mavhunga received several presents, including a farm and a farm house valued at ZW$5 billion. In court, the state argued that she committed an offence by saying there was diesel in Maningwa, when, in actual fact, she knew this was false.

It was pointed out to the State that Mavhunga’s acts interfered with the ordinary comfort, convenience and peace of the public. Mavhunga was also charged on another fraud charge in which she allegedly bartered a stone weighing about 18 kg, which she claimed was gold, in return for a cow.