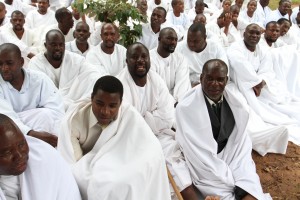 Members of an apostolic church in Masunda Village under Chief Madamombe in Chivi North in Masvingo Province got an Easter surprise on Saturday last week when an enormous crocodile was spotted at their church during a prayer service.

The surprise visit by the ‘saint’ crocodile, which reportedly measured about two metres long, triggered great panic among congregants of Zvishamiso Zvavapostori Apostolic Church with some of them suspecting the spotted reptile was on a witchcraft expedition.

The strange scene which brought prayer proceedings to a halt came barely a few weeks after a family in Zvishavane’s Makwasha suburb woke up to find on their verandah a crocodile about a metre and a half long decked with white, blue and red beads and some paraphernalia associated with witchcraft which comprised of snuff and herbs.

Artwell Mupumbu who reportedly witnessed the rare spectacle said church members were gob-smacked when the dreaded creature was spotted during a church service.

“We were surprised when a crocodile came to our church and subsequently stopped prayer proceedings after it lurked at the healing shrine. We just couldn’t believe it. We were first alerted of its presence by the petrified screams of children who were playing a few metres away from the gathering. Although we were shocked and still trying to come to terms with what was happening since we have never witnessed such, as Christians we are not affected and moved because we pray and believe in a living God,” said a terrified Mupundu.

He said the unwanted ‘congregant’ later made good its escape from the astounded parishoners after they pelted it with stones and logs.

“It was the freakiest thing to find a crocodile in broad daylight coming to a group of people unmindful of the noise we were making during the prayer session. What is really disconcerting about the whole episode is that it’s rare to find or meet a crocodile away from a water source such as a river or dam and as Christians we were surprised when it was spotted at our church which is not close to any water bodies,” said another witness, Alice Munenje.