Chabadza is a word in the Shona language of Zimbabwe that means a partnership in which passers-by stop what they are doing to help someone else do their work. Through the partnership, it’s believed that both sides are enriched. 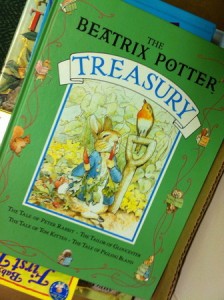 A box of books awaits a trip to Zimbabwe (Credit Andrea Zrimsek).

As her hometown newspaper describes, Pennsylvania resident Elsa Zollars is the embodiment of the chabadza spirit. At a spry 76 years young, Elsa has put aside her own needs to help the people of Nyadire, Zimbabwe have a better life.

“The people in Nyadire are the best people I’ve ever met. Their life is more simple and they don’t have a lot of the things we have,” says Elsa. “But they also have something we don’t. They have hope in the face of so much adversity.”

Elsa says she does not go more than two hours without thinking about one of the children or adults she has befriended in rural Nyadire. Through all of the hardships and corruption in the country, Elsa says the Nyadire people are still very joyful and resilient. And they have a sense that tomorrow will be better, even though there is nothing to support that belief.

The retired teacher, school director and consultant met the people she now thinks of as family through The Nyadire Connection, which is a faith-based, non-profit organization that seeks to support and sustain the the Nyadire United Methodist Mission 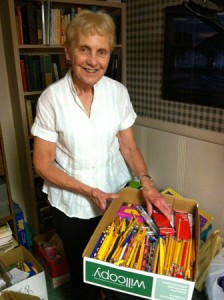 Elsa Zollars sorts through a box of pens and pencils she collected to send to the Nyadire Mission (Credit Andrea Zrimsek).

in northeastern Zimbabwe. The 4,300-acre Nyadire Mission is similar to a college campus and is made up of a hospital, primary and secondary schools, a teachers college, a nurses college, an orphanage and many other services to the community. It’s a place full of people working for a better future.

Elsa got involved with The Nyadire Connection shortly after her daughter, Mary Beth Zollars, returned from the original three-week mission trip to Nyadire in 2006. The 18 people who went on that trip returned to Pittsburgh in the USA with a plan to forge a long-term partnership between the two sides of the world.

Mary Beth’s passion for the Mission quickly spread to Elsa, who began helping with paperwork and collecting donations. One goal of The Nyadire Connection is to collect and send much-needed medical and pharmaceutical supplies to the hospital at the Mission.

Soon, Elsa’s basement began filling up with medical supplies and pharmaceuticals for the hospital. But that was not enough. Elsa began asking friends and colleagues for donations of schools supplies, shoes, toys, books and anything else she could package up and send. When someone asked her why she was sending building blocks to Zimbabwe, she simply answered, ‘why are we not sending them?’

Now with her help, The Nyadire Connection sends a full shipping container to Zimbabwe two or three times per year. The group has sent everything from hospital beds and wheelchairs to games and backpacks full of school supplies.

“This experience has been like peeling an onion, because with each layer you uncover more and more people who want to be a part of it in one way or another.”

Elsa made her first trip to Nyadire in 2008. The people at the Mission greeted her with surprise because of her age, but it didn’t take long for the children at the Home of Hope orphanage to fall for her. They even began calling her ‘Go-Go,’ which means grandma. But it’s also the best way to describe Elsa’s attitude toward helping others.

“I’ve retired three times but I’m not retiring from this. I still have a lot of things I want to do.”

One Response to 76-year-old American woman: not retiring from helping Nyadire Methodist mission