Reprinted from My Zimbabwe, with minor additions 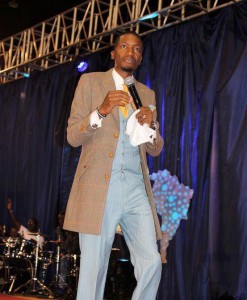 A Harare couple was short of words when their church leader Prophet Uebert Angel shocked them with a life time present of a car.

The man narrated how Prophet Angel, who, after last week’s Thursday service had spoken on the message “God rewards commitment” stunned them with this staggering gift. In a statement, Spirit Embassy said the flamboyant youthful prophet surprised the young couple with a mint AUDI TT QUATRO.

“A car presented to the couple as a gift not for anything that they had done but because it is the nature of prophets to give. The prophetic ministry is a giving ministry and like Prophet Angel always says, ‘The moment I give you a word from God, I am demonstrating how the prophetic office is a giving office,” said Spirit Embassy.

In June this year, the 35-year-old man of God reportedly donated yet another vehicle to one of his followers.

While praying, the prophet is said to have approached a lady and asked her, “What do you want God to do for you?”

The woman reportedly responded: “I want my own house and car, Papa.”

Prophet Angel, who changed his surname from Mudzanire to Angel when he left UK in 2011, reportedly immediately handed over car keys to the woman for one of his many cars. Reports say the vehicle was a VW Jetta. The woman is said to have dropped to the floor before running around, screaming in sheer joy.

In May this year, Prophet Angel, a father of four, also surprised one of his followers when he handed him keys for a brand new Range Rover Sport.

In January this year, the self-proclaimed Zimbabwe’s most educated pastor, grabbed headlines when he bought a Mercedes Benz C200 Kompressor for his spiritual son, Mudiwa Mutandwa, a musician who fellowships in his Spirit Embassy church. The GIFT was in recognition of his impressive musical year that saw him bagging three awards and ministering the Word of God through music.