A rural hospital at the Nyadire mission, run by the United Methodist Church (UMC), received donations including X-ray machines, orthopaedic and surgical tools and an operating table. The equipment and supplies have greatly enhanced operations, says the medical superintendent of the hospital, a young Congolese doctor Tshiani Kasombo. With Mr. Kasombo’s help, UMC signed a Memorandum of Understanding with Econet Wireless, a local telecommunications company, that will bring about improved phone and internet services to the mission. 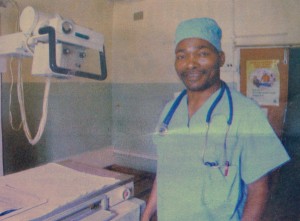 Congolese Dr. Tshiani Kasombo reached out for new resources to various partners in Zimbabwe and abroad (photo from Zimbabwe Independent).

The situation at the hospital was daunting and when doctor Kasombo accepted the offer to move to Nyadire in 2007 (upon gratuation from the United Methodist-related Africa University) he at first wondered if it was wise choice for him and his family.

“We decided to work with what we had,” explains the Congolese doctor. Tshiani began with officials in the Zimbabwe Ministry of Health and Child Welfare. “I addressed the Provincial Medical Director for more staff.” Result? “We now have 95% of the staff we need.”

The hospital already has a working relationship with the Western Pennsylvania Conference of the UMC in the USA. Established in 2006, it is called the Nyadire Connection. Planning is underway on a water project to boost supply to the whole mission that will be funded by the United Methodist Committee on Relief (UMCOR).

Nyadire mission hospital lies at the junction of two districts, Mutoko and Uzumba Maramba Pfungwe in the north-eastern part of Zimbabwe.