AFM Pastors die in a road accident near Esigodini 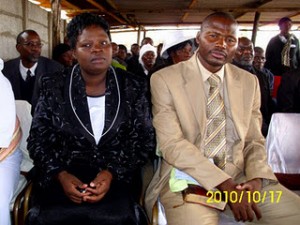 Pastor Tashaya and Pastor Shayawako died on the spot while Pastor Moyo and Pastor Chitsa sustained serious injuries and are battling for their lives in the Intensive Care Unit at United Bulawayo Hospitals (UBH). Pastor Chigeda was said to have dislocated his leg while Pastors Kandore and Ndlovu suffered minor injuries.

Pastor Kandore told Relzim.org that  the car they were travelling in got its tyre burst  and overturned three times.  “We were coming from an outing in Esigodini. After the car overturned, I don’t know how we were thrown out of the car. All I know is that I saw Pastor Shayawako’s body buried under the car. We then asked for assistance from people who were passing by to move the car. At that time Pastor Tashaya was seriously injured, failing to breathe properly and we lost him moments later.”

Pastor Tashaya was the AFM Bulawayo South Province Deputy Overseer and pastoring the AFM Morningside Assembly while Shayawako was the secretary of the board pastoring the Emganwini assembly.