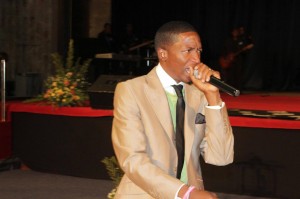 Prophet Uebert Angel, the Spirit Embassy founder and leader, was last week feted with hero status in Kenya, following his accurate prophecy in which he foretold the terrorist attack on the Westgate Mall in Nairobi recently.

Angel, was also introduced to Kenyan President Uhuru Kenyatta during a mass church service attended by more than 10 000 people.

Angel, widely considered to be the pioneer of forensic prophecy in the region, has in the past few years been invited by serving and former presidents among other high level people who seek spiritual intervention.

In a statement released yesterday, the Spirit Embassy said Angel had been invited by Teresia Wairimu, the President and founder of the hugely popular, Faith Evangelistic Ministry in Kenya. Last Sunday’s church service conducted by Wairimu was also attended by Kenyatta.

“While attending church service during introductions, Prophet Angel was introduced to President Kenyatta and was told that he was the man who had prophesied the Westgate Mall massacre and there was a huge standing ovation for the man of God. Kenyatta was startled.

“President Kenyatta acknowledged his presence. Prophet Angel later spent hours discussing business with about 200 business people and dedicated an hour to preaching and prophecy,” reads part of the statement. In Kenya, Angel is treated as a hero especially after the prophecy he gave on the Westgate Mall massacre.

Angel also took to the streets where he was reportedly met by thousands of people who wanted to catch a glimpse of the miracle man from Zimbabwe.

He now has many accolades to his name including being UN ambassador and was recently voted the most influential young man in Zimbabwe.