Anglican dean of Norwich: I had come to witness a church in exile

reprinted with corrections and additions from the Norwich Evening News

Dean of Norwich, the Very Rev Graham Smith, visiting Zimbabwe recently sent a message of hope to the Anglican community in the country, donating a throne for when they return to the cathedral, with words engraved: “in exile.” 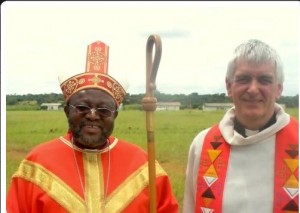 Reflecting on the visit, Smith said, “I went to remind the people they are not forgotten and that the worldwide family of Anglicans is deeply concerned and praying for them. That was always met with spontaneous applause. The emphasis was on holding the people together. I had to explain I had come to witness a church in exile. A lot of the Anglicans have bought a plot of land and worship under shelters. Congregations are growing very fast because people are aware of the persecution. I was saying, when you get back into your churches it is important to build on this experience. It is also a time of great blessing – the church has grown and people are more confident about their faith.”

But the dean had to tread cautiously as a guest of Bishop Chad Gandiya. His car was tailed, while the bishop, who is followed by security guards, has been mugged and his home burgled. The dean said, “You can feel quite a tension that anything could happen. People are worried something might happen to him. There are regular incidents each month where services have been interrupted and stopped. We went to a service in the bush and we were told the venue had been changed as the police were coming to stop it.”

“It is a whole different set of priorities when you think about what we worry about. It was really quite a shock.”

Speaking to the Norwich Evening News, Smith said, “It was made extremely clear to me that I had to be extremely careful with what I said. The worst thing that could happen to me was being deported, but it would have had a much more serious impact on my hosts. I was always very careful not to embarrass them.”

But at what was a private dinner party with white farmers, the dean found his comments about gay people reported in the press. “I gave my liberal views on it,” he said. “I said homosexuals should not make people fearful. It is something to be respected, which proved inflammatory.”

The dean’s 10-week trip to Africa as a guest of the bishop followed a visit by the Archbishop of Canterbury, Dr Rowan Williams, last October to show support for the persecuted Anglicans.

Special Coverage of the Anglican Crisis in Zimbabwe