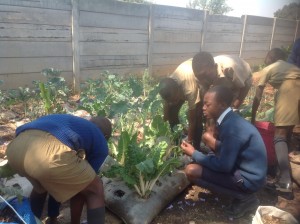 Anglican Diocese of Harare in the Church of the Province of Central Africa has began organic garden projects among its schools aimed at helping child headed families and people living with HIV.

She said the organic gardens do not require any chemicals even the sprays are home-made.

“Most families in our communities are now child headed as a result of the AIDS pandemic. So we need to ensure that these children live healthy lives,” Marengereke said.

Bishop of the Anglican Diocese of Harare in the Church of the Province of Central Africa Chad Gandiya in a speech read on his behalf by Reverend Clifford Dzavo, Gandiya said the church will continue to implement such programmes.

“Your move as educationists to impart this noble concept to your students and subsequently to your communities shows us that you are bent on achieving the three ZEROs in as far as eradication of HIV is concerned in our communities. This programme will ensure healthy lives to our communities especially the children who are our future leaders,” Gandiya said.

Gandiya said child headed households are now a feature in the communities and “with this concept in place, such families and the elderly will afford healthy and chemical free vegetables thereby living longer lives.” 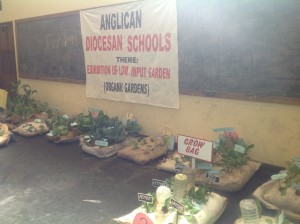 Part of the exhibitions from the 13 schools that participated during the Anglican schools organic garden competitions (photo: M Chibaya).

He said the idea of maximum utilisation of waste matter plays a major role in environment management.

“Whilst we grow organic vegetables on one hand, we also get rid of litre thereby keeping our environment clean,” Gandiya said.

St John’s primary school came first in the organic garden competition; St Mary’s primary was on the second place with St Francis and St Clare and St John’s on the third place.