Another ‘prophet’ on the run in Zimbabwe

According to Zim Daily, clients of a self-styled prophet who were allegedly swindled of 24, 340 USD in car sales beat up ‘prophet’s’ faithful.

Police were looking for Costa Gombera (37), who is also known as Madzibaba Paul Gracia, in connection to the alleged fraud. Assistant Inspector Tarirai Dube said the cheated clients beat up the congregants after their efforts to locate Gombera led them to Budiriro 5A where he led an Apostolic sect. 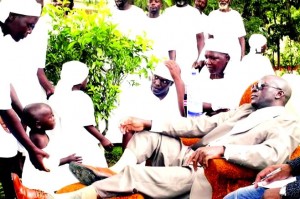 Zimbabwe has seen its fair share of false prophets - Pictured above is the late Madzibaba Nzira surrounded by his many wives, who had just been released after being accused of raping young girls (photo. courtesy "Zim Daily").

They failed to locate him, which prompted them to vent their anger on the worshippers. Gombera used to operate a car sales business at Maruta Shopping Centre along Seke road where he received vehicles from different clients to sell them for a commission.

Instead of handing over the money to the clients after selling the vehicles, he allegedly converted the money to his own use. The clients reported the case to the police, who later visited Gombera’s home to only find out that he had disappeared.

The clients then look for Madzibaba Paul Gracia at his place of worship in Budiriro 5A, but could not find him.
Police are now appealing to the assaulted church members to reveal Gombera’s whereabouts.

As of recently, Zimbabwe has seen an increase in people pretending to be prophets. An example of such controversial person was the late Madzibaba Nzira, accused of raping young girls and released following the arrest.