According to newzimbabwe.com, the Apostolic Christian Council of Zimbabwe (ACCZ), an ecumenical board of Apostolic and Zionist churches, said Monday that it was adopting a constitution making it mandatory for members to vaccinate and immunise their children.

The latest breakthrough follows years of lobbying by health authorities, Prime Minister Morgan Tsvangirai and President Robert Mugabe who have used appearances at church conventions to call on the churches to embrace immunisation.

“There have been clashes between some members of the Apostolic and Zionist churches and the Ministry of Health and Child Welfare over the issue of immunisation. It has been alleged that some members have been refusing to immunise their children on religious grounds. We want to change that and, as a board, we are working towards a solution,” said Bishop Johannes Ndanga, speaking in Gokwe where Headman Chisina was named patron of the Apostolic and Zionist Churches. 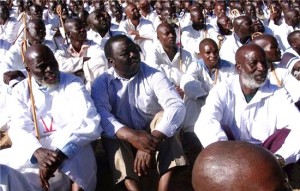 Prime-Minister Tsvangirai among the Vapostori (photo by newzimbabwe.com)

Health officials say hundreds of children have died in recent years after their parents refused to have them immunised, citing strict religious beliefs. Measles have been the biggest killer.

Some members of the Apostolic churches shun most forms of western medicine in the belief that it diminishes their supernatural powers.