Apostolic sects: Gabriel will rule all over Africa

The investigations by Zimbabwe Briefing on three apostolic sects in late 2010 and early 2011 reveal that they are using President Robert Gabriel Mugabe to represent the Angel Gabriel. Songs have even been composed which speak to this. 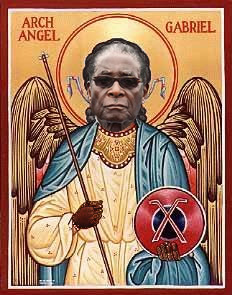 One such song goes: Gabriel will rule all over Africa/Gabriel will rule all over Africa. And a typical sermon – also heard went as follows: “Gabriel is supreme and is the carrier of the blood of Jesus [Christ] so we can’t abandon him. In this gathering we always say “Forward with R.G Mubabe and you also agree that it so, right?” said the minister and the congregation agrees with him. He goes on: “Who really is Gabriel? Is he not the president?” Again, the congregation agreed that it was indeed so.

Then: “For him [Mugabe] to be named Gabriel, were there no other names to give him? He is the anointed one. He was even ordained by Mbuya Nehanda (spirit medium and protagonist of the first uprising against colonial rule in the 1890s) as somebody who was fit to govern Zimbabwe and not those we are being given today.”

In Epworth, near Harare the minister was heard saying the church with largest number of ZANU-PF Chairpersons was his.  “As we are gathered here, the leaders [in ZANU-PF] know that we all belong to the party and that even anything to do with sport such as football was also a part of the party. Forward with ZANU-PF! Forward with our land! Down with those who do not support this,” he says and the congregation agrees with him.

In Mudzi North, the preacher was heard saying: “We are sorry for some of our black colleagues who meet and work with white people. It’s now time to decide whether we let the country go [to sell-outs] or we guard it.” The congregation then breaks out in song saying Gabriel will rule all over Africa.

2 Responses to Apostolic sects: Gabriel will rule all over Africa