Healing Voices became the centre of attention after they thrilled hundreds of guests who thronged 48 Poinsettia in Msasa Park by ‘hijacking’ the stage from Blessing Shumba who was singing back-to-back with Bethan Pasinawako.

As if that was not enough, Healing Voices went an extra mile giving the guests a five-hour non-stop performance that set the guests in uncontrollable excitement as they churned out some of the well-loved golden hit tunes like ‘Rodha’ (an original composition) and other remixed songs of the late Tongai Moyo.

The big question that was now lingering in the minds of the guests was, “What does the future hold for Healing Voices?” 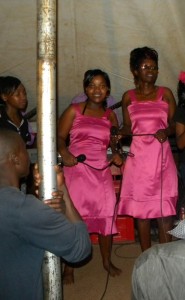 In an interview with Relzim.org, Bethan Pasinawako said, “The future of Healing Voices is bright. And in less than two years they will be one of the best groups in the genre of gospel. This is so because they are just different in the sense that they are not copying anyone, they are original.”

Shumba concurred with Bethan that the group was destined for greater things. “The group is great. My wish is that they should release an album.
With the talent that I have seen, I can say that by next year they will be making waves in the music industry,” he said.

The group which is barely four months old managed to scoop a cash prize at the Kwekwe Arts, Music and Cultural Festival early October this year.

Healing Voices which has performed side-to-side with artists such as Mercy Mutsvene and Charles Charamba is set to wow revellers at the National Unity Gala scheduled to take place in Gokwe on December 14.