Bulawayo-based prophet: our people go to Nigeria because they look for the power of God

Prophet Bothwell Phiri sternly warned Bulawayo pastors against criticizing popular Nigerian prophet TB Joshua. Instead, River of Life Church leader urged the men of the cloth to focus on preaching the Gospel of Christ rather than vilify other men of God. 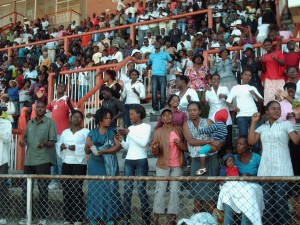 Part of the crowd during the last week's national peace prayer in Bulawayo (Photo. M. Tshuma).

Prophet Phiri gave the caution during a national peace prayer at Barbourfields Stadium organised by church leaders in the second largest city.

“Bafundisi (pastors), bafowethu (brothers), let’s stop fighting people whom God is using [just] because we don’t like them,” said prophet Phiri.”If we don’t understand what they are doing, leave them alone, don’t go criticizing other men of God and talking evil of other men of God. You have enough preaching to do on your own. Stop talking about other people!” he called.

Urging his fellow pastors to stop criticizing West African prophets whom some Zimbabweans have visited, Bothwell Phiri said, “The reason why our people are going to Nigeria is because they are looking for the power of God and they are not seeing it in our nation. Raise up the standard of the fire of Jehovah on our nation!”

Pastors from both the mainline churches and a new crop of Pentecostals were at the prayer meeting which was also attended by South African gospel musicians including Sipho Makhabane and local singers.

AFM prophet: TB Joshua moves up expectations of the faithful

One Response to Bulawayo-based prophet: our people go to Nigeria because they look for the power of God