Catholic youths are challenged to use digital technology for evangelisation

reprinted from In Touch with Church and Faith newsletter, with additions

Catholic youths from St Alois and Agnes guilds in Dzivaresekwa, Mt Pleasant, Hatcliffe, Marlborough, Emerald Hill, Cathedral and Rhodesville parish joined their hosts in Mabelreign, Harare for a day-long commemoration of the life of St Agnes that is celebrated worldwide annually on January 20. 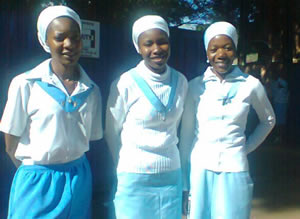 The theme of the celebrations was “Spiritual growth, new evangelization, digital creativity and the Catholic faith.”

In his homily to the youths on the day, Fr Sylvest Kasirori SJ highlighted the need for the youth to use technology in its manifestation through social networks to their advantage in so far as it improves their faith and helps deepen their relationship with God. He urged them to guard jealously their faith and to always be identified with their faith in all that they do in life.

The youths learnt that secularization had become a cancer in society today and it is being preached through the digital creativity of the youths. Technology is like second nature to many youths. The call therefore was to make good the opportunities presented by digital technology and use it for evangelisation.

St. Agnes was a Roman girl who was only thirteen years old when she suffered martyrdom for her Faith. Procop, the Governor’s son, became very angry when she refused him. He had tried to win her for his wife with rich gifts and promises, but the beautiful young girl kept saying, “I am already promised to the Lord of the Universe. He is more splendid than the sun and the stars, and He has said He will never leave me!”

In great anger, Procop accused her of being a Christian and brought her to his father, the Governor who condemned the girl to death.