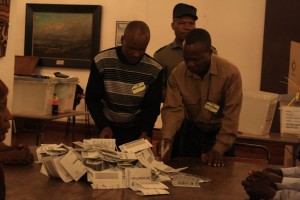 Catholic bishops have said the “fairness of the (electoral) process is in dispute”, calling for problems and irregularities to be fully investigated by responsible authorities.

Father Frederick Chiromba, secretary-general of the Catholic bishops’ conference, said the “problems and irregularities that were experienced must be investigated by the appropriate” legal authorities and will “provide lessons for future elections”.

Noting that many previous elections in Zimbabwe “have been marred by violence,” Fr Chiromba said it is significant that “this time there was no overt violence”.

“The fact that the elections were rushed may have compromised their credibility,” he added.

Last Saturday Robert Mugabe was declared the winner, giving him a seventh term as president. He reportedly gained 61 per cent of the vote. MDC leader Morgan Tsvangirai, meanwhile, has accused Mugabe’s party of vote-rigging.

Bishop Alexio Churu Muchabaiwa of Mutare, chairman of the national Catholic justice and peace commission, said that the polls “were very peaceful compared to the 2008 elections”, which were marred by violence and intimidation.

“But there was intimidation this time around, too,” he said, particularly in rural areas, traditionally strongholds of Mugabe’s party.

The commission and the Inter-Regional Meeting of Bishops of Southern Africa said that they recorded 47 incidents of poll irregularities in the elections.

Bishop Muchabaiwa told a press conference that the Catholic Church was concerned that a significant number of voters could not find their names on the voters’ roll.

“There are more incidents that are yet to be verified,” he said.

The Church “strongly encouraged people to participate” in these elections, Fr Chiromba said, noting that, in a pastoral letter earlier this year, the bishops said this election would be as important in determining the country’s destiny as the 1980 vote that led to independence from Great Britain.

“We are hopeful that a rehabilitated country will bring back those who left Zimbabwe as economic refugees,” Fr Chiromba said.

“There are too few jobs at present to entice many among Zimbabwe’s Diaspora to return home yet,” he said.
Bishop Muchabaiwa said that Zimbabwe’s high unemployment rate and levels of corruption were among the Catholic church’s major concerns.

Zimbabwe is still reliant on food aid, he said, noting that there are insufficient local corn supplies this year.

“Although the supermarkets are fully stocked, many people can’t afford to buy the food they need to feed their families,” he said.