But the event that took place in the Jubilee Hall of the Archdiocese of Harare today provides valuable insights into how Zimbabwean Catholics can learn from challenges of the past. Even more so, the official launch of the 2013 World Youth Day savings fund could prove a source of inspiration to the organizers’ non-Catholic compatriots.

World Youth Day is a youth-oriented Catholic Church event initiated by Blessed John Paul II in 1985. While the event itself celebrates the Catholic faith, the invitation to attend extends to all youth, regardless of religious convictions so that they can get an insight into Catholic beliefs and practices.

Every two years young people from all over the world converge for two weeks of cultural exchanges, lessons on Catholic faith and meeting cardinals and the Pope. Last year’s WYD took place in Madrid, Spain. A group of 217 pilgrims from Zimbabwe attended this event, with representatives coming from all 8 Catholic dioceses in the country. The number could be much bigger, however. Due to financial constraints, lack of information, late onset of preparations and failure to meet deadlines many young Zimbabweans were left behind.

Realizing an urgent need to start preparing for the 2013 WYD (held in Rio de Janeiro, Brazil) as well as share with all youth throughout the country what was learnt at Madrid edition, people like Jacob Shamuyarira decided to act now.

Mr Shamuyarira told RelZim that already in September of 2011 (a month after the end of the previous WYD) TN Asset Management, local financial advisory company, undertook a research to evaluate the possibility of creating a fund that would help the families of young Zimbabweans to go on the next WYD pilgrimage. In the meantime, it was decided in various consultations between young Catholics and the clergy responsible for the youth that a local website will be put up to serve as the primary source of information for both the pilgrims and their parents. Sure, there is also a Facebook page.

Speaking on behalf of the parents whose children visited Madrid last year, Mrs Sakonda shared her concerns about the logistical challenges and complained about the lack of fast information exchange during the preparation to the last year’s WYD trip, which led to a lot of anxiety among the pilgrims as well as increase in costs. Despite all this, she underscored how much her two children grew in their faith during the pilgrimage. She said that her daughter started taking joy in singing during the mass after she returned from Spain. Mrs Sakonda encouraged Zimbabwean catechists to work harder in fostering faith explorations of youth. 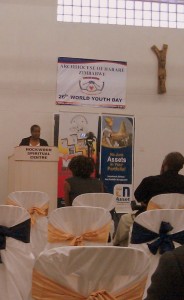 US$260– pocket money (varies based on personal needs)

The TN Asset Management package presented today will enable pilgrims to save their funds and receive interest at the end of the year. Under the package, all youths will get promotional material to swop with other countries as well as cash passports to enable them to transact in Brazil. The Visa network in Brazil has already been predetermined, and back-up arrangements are in place should an individual lose his/her card.

Moreover, based on possible numbers, Zimbabwean group could benefit from collective bargaining through dealing directly with airlines, financial institutions and promotional material companies who will produce quality material at a relatively low price. 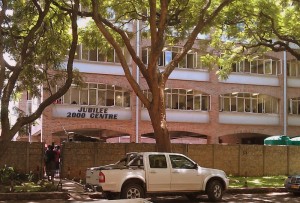 Outside the Jubilee Hall of the Archdiocese of Harare.

Arrangements have been made to contact the master 2013 WYD website administrator in Brazil who will be providing Zimbabwean pilgrims with first-hand information on developments around the event.

The pilgrimage will run for two weeks from 14th to 28th July and will be organized as follows: