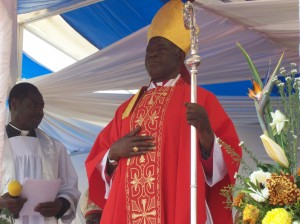 The Roman Catholic Church in Zimbabwe has opened a new chapter, in Gweru diocese with the consecration and ordination of Monsignor Xavier Munyongani as Bishop of Gweru diocese.

Gweru diocese has been running for 18 months without a Bishop.

Speaking during the ordination ceremony, in Gweru at Mkoba Stadium on September 14, Bishop Munyongani said, “I am happy and I thank the Lord for this day. The diocese has been running for more than a year without a Bishop. So it is my duty now to serve and represent the people in the diocese,” he said.

In an interview, with RelZim, Gweru Catholic Church Social Communications Director hailed the ordination of the new bishop and refuted claims that the diocese had been battling in its operations because of the absence of the bishop.

“Since 2007, the Gweru diocesan was vacant but we were under the care of Bishop Michael Dickson Bhasera. There are no challenges I can say we encountered during the period when the bishop post was vacant.

“Bishop Munyongani is the 5th bishop to be ordained in the diocese,” he said.

Bishop Munyongani was born on 1 January 1950 to Joachim Mudhodhi and Anna at Mutero Mission Hospital as the eighth child in a family of ten. After his primary education in Gutu, he completed his secondary education in the Gweru Diocesan Minor Seminary. Later he joined Chishawasha Major Seminary for his Philosophy and Theology studies from 1971 to 1977.

He was ordained priest on 20 August 1997 to the diocese of Gweru by Reverend Tobias Chiginya. In 1978 he obtained a Diploma in Religious studies from the University of Rhodesia.

Bishop Munyongani served as assistant priest at St. Antony’s mission in Zaka, as parish priest of St Alois Mission Silobela and Spiritual Director of St. Anselm University. On his return he was appointed Lecturer, formator and Vice Rector of Zimbabwe’s at Chishawasha Major Seminary.

Among other positions he has held include Promoter of Lay Apostle and Spiritual Director of St. Joseph Association of Masvingo Diocese, member of Diocesan Liturgical Council and others.

In 2007, the Zimbabwe Catholic Bishops Conference appointed him as chaplain to the Zimbabwean Catholics in England. In recognition of his exemplary priestly life and meritorious pastoral zeal for the church, Pope Benedict XVI conferred upon Bishop Munyongani the title of “Monsignor” meaning ‘my lord’.

The diocesan of Gweru became vacant in April 2012 following the resignation of Bishop Martin Munyanyi due to poor health and was given to the care of Rev Michael Dickson Bhasera, the Bishop of Masvingo as Apostolic Administrator. Pope Francis on 15 June 2013 appointed Monsignor Xavier Munyongani as the Bishop of Gweru.

The colourful event that was attended by more than 10 000 people, and some Bishops came as far from South Africa and Australia.