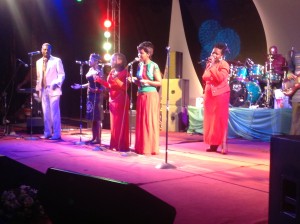 Celebrated gospel music couple, Pastors Charles and Olivia Charamba is in Australia for their maiden tour that will see them performing in that country’s major cities.

The duo left the country last night together full band, Fishers of Men for the much anticipated gigs. Speaking through their manager Ngonidzashe Chandiwana, Pastor Charamba urged their Australian fans to expect nothing short of fireworks.

He said “We plan to leave a mark in Aussies through powerful ministrations in music,” he said before embarking on the trip.“The group had adequately prepared for the trip. They will be churning hit songs from all their albums including the latest Pashoko Pangoma.

A spokesperson for Afro Jazz promotions, Nyabinde, who are the organisers of the tour expressed satisfaction with the level of preparations so far. “The shows kick off on October 9 with the first performance in Melbourne. It will be followed by another on October 10 in Brisbane before proceeding to Sydney the following day,” he said.

They will round off their shows Perth on a Sunday on October 13 according to the spokesperson. Since completing his studies and graduating with a music degree in Ethnomusicology at Africa University in July, the Apostolic Faith Mission pastor has intensified his regional and international tours.

Last month, they headlined in Mozambique’s Chimoio and Busi where they took fans on a spiritual journey through music.

The Fishers of Men is made up of Beverly Chenera, Gloria Gasani and Kudzaishe Marimo as backing vocalists, Michael Anatori the lead guitarist, Charles Ayibeki on keyboards, Paulos Victor the rhythm guitarist, Lyton Saizi the bass guitarist, Ronald Mundhuli the drummer together with Chandiwana as manager.