A total of 11 villagers from Matobo district’s Bambanani ward 9 this month became proud owners of cattle, following a livestock-handover ceremony, attended by Christian Care officers and the traditional leadership of Matabeleland South province.

The ongoing cattle project under the name Kezi was initiated by Christian Care, a Zimbabwe-initiated faith-based organisation, to economically empower villagers with an initial stock of 22 heifers between the years 2006 and 2009. That number has since been expanded to over forty heads of cattle donated to date.

Villagers in the four villages of St. Anna, Sihayi, Hlababomvu and Tshiphisani teamed up in groups of three, in which they were allocated a heifer.

Among recent beneficiaries were nine women and two men who were also presented with Christian Care certificates of cattle ownership at the homestead of the village head Mr. Isaiah Namate-Ndlovu in St. Anna, that falls under the jurisdiction of chief Bidi. 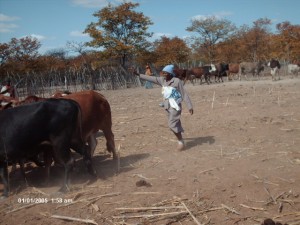 “I am so grateful to Christian Care for what they have done to me, as I now own cattle, something I never thought of before. I really don’t know how I can thank Christian Care,” said Ms. Lister Ndlovu of St. Anna, while dancing and singing happily.

Cattle is a symbol of power and authority in Ndebele culture, as well as an important source of income in the semi-arid Matabeleland environment.

Earlier, Christian Care project co-officers pastor Everson Ndlovu and Mrs. Duduzile Sikosana said the cattle project targeted any villager without cattle, who expresses a will to have it and to learn how to look after the most-valued livestock. The two officers added that it was their prayer that every villager in Matabeleland became an owner of cattle.

Pastor Ndlovu and Mrs. Sikosana also revealed that a similar cattle programme was launched in the Guyu ward of Gwanda district in Matabeleland South in 1993, with an initial stock of 94 heifers. They said the project, that continues to be managed by villagers themselves, has since spread to five wards in that district.

Established in 1967 by the Zimbabwe Council of Churches, Christian Care is one of the largest food-relief organisations in the country with a membership of over 25 denominations.