Church, Dzamara family to hold a joint demo and congregation 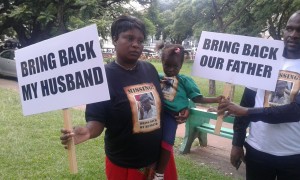 The Zimbabwe Devine Destiny church in partnership with the missing Itai Dzamara family said that they are planning to hold a massive demonstration and a congregation where they will be celebrating the life of the disappeared Journalists-cum social rights activist Itai Dzamara.

Patson Dzamara brother to the missing Itai Dzamara told Journalists on the sidelines of a prayer meeting they held in Harare’s Africa Unity Square Tuesday to mark the 11th month of his brother Itai’s disappearance that the joint event has been slated for the 9th of March.

He said people should come in their numbers and join them in a massive demonstration which will send a message to government that they want their family member back.

“We want numbers as we march throughout the city and congregate for the launch the documentary which celebrates the life of Itai who above all we consider a hero,” he said.

“We do not mind whatever happened and whether we are going to see him or not, he is an idea or he represents an idea whose time has come, so as a people we are going to augment that through our celebration of his life”.

Patson said time was up for Zimbabwean youths to demand their constitutional rights.

“These people who are busy defecating on our future have already expended their lives and it is now our future that they are messing up with. So it is our responsibility as young people and we encourage you to   join us especially on the 9th of March,” he said.

Speaking at the same event Zimbabwe Devine Destiny director who is also the Itai Dzamara Trust board chairperson Bishop Ancelimo Magaya said President Robert Mugabe and his leadership should not forgiven for its brutality.

“We bemoan and lament the fact that 11 months after Itai Dzamara was abducted, his where about are still unknown and there is no trace of him and there is no an aorta of remorse on the part of President Mugabe and his top leadership,”said Bishop Magaya.

“There is no indication that they do regret and lament that under their leadership people still disappear, they are the custodians of the constitution and we are very sad to say that”.

Bishop Magaya said Mugabe has learnt a lesson from the Dzamara family that people will not zip their mouths when their family members have been abducted.

“However what we want to encourage Zimbabweans is that they need to be definers of their own destiny as I have always said and this time around let it be registered that never again will any Zimbabwean be abducted and we fold we will put pressure,” he said.

As part of putting pressure to government so that it searches for Dzamara Bishop Magaya said they have sought an appointment with Vice President Mnangagwa.

“I have already crafted a letter to him and we are still to secure an appointment and we are going to set it this week, and we pray that he is going to give us audience,” he said.