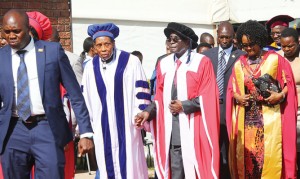 IN the face of unrelenting pressure from within Zanu PF, President Robert Mugabe has once again turned to the church for divine intervention and votes, as angry war veterans have vowed to dump him, while vicious factional fights threaten to tear apart the party ahead of the 2018 elections.

Last Friday, Mugabe dangled a carrot to Zimbabwe Assemblies of God Africa (Zaoga) church members, offering them additional land for expansion of the Zimbabwe Ezekiel Guti University (Zegu) and “wrote off” the $2 million the educational institution owes to Bindura Municipality.

“We fought for land, and I was actually saying, the piece of land is small, be free to approach us when you need more land to expand your activities. No one will remove you from this land. You are not going to pay anything.

“You fought for this country with prayer, while us, the liberators, used our hands to fight for the land. This is the land that we fought for, we are giving you free of charge, and if you want some more, to build some more faculties like mining and agriculture, we will give you some more.”

Mugabe’s son-in-law, Simba Chikore is a member of the Zaoga church.

In what appeared to be a clear contempt of court processes, Mugabe chastised Chikumba for taking the church to court and pushing for demolition of the university’s structures.

The matter is still pending at the High Court, where Chikumba claims the university was built on his gold claims.

Mugabe also pleaded with Zaoga leader, Ezekiel Guti to pray for the restoration of moral values in the country, saying moral decadence had triggered fights and quarrels in society, including political parties.

“As I said, we are losing our morals and things are getting worse. Archbishop Guti, you should pray for our moral revival,” he said.

This is not the first time the ruling party has turned to the church for votes, as its top officials normally grace large church gatherings, particularly when major elections are looming.

Zanu PF is currently locked in bitter factional fights reportedly between Vice-President Emmerson Mnangagwa’s Team Lacoste faction and the G40, which have threatened to split the party again after it parted ways in 2014 with former Vice-President Joice Mujuru, who was accused of plotting against the veteran leader.

Mugabe’s relationship with war veterans, one of the influential arms of his party, has also been strained, following relentless attacks on Zimbabwe National Liberation War Veterans’ Association’s leadership by First Lady Grace Mugabe and party members linked to the G40 faction.

A panicky Mugabe has called for a meeting with the former freedom fighters for early next month.

He said the war veterans were becoming a bad influence on the youth, who have been publicly calling for his resignation and attacking his wife, Grace.

Meanwhile, lawyer and MDC-T spokesperson, Obert Gutu said Mugabe’s decision to officiate at a university with a pending court case had shown his disregard for the rule of law.

“It just shows utter contempt and disregard for the courts and legal systems in the country by Mugabe and his regime. In fact, this is another form of exerting undue executive and political pressure on the judiciary. It’s very sad,” he said.

“Remember, there could also be some family sentiments in the mix here since Mugabe’s son-in-law is a member of Ezekiel Guti’s church. The MDC-T is a God-fearing political party and, in fact, we hold Apostle Ezekiel Guti and his church in very high regard.

Human rights lawyer, Prayers Chitsa said Mugabe was not supposed to take sides in the dispute, particularly since the matter was before the courts, as this had the effect of subverting justice.