Prayer is the most important thing to someone who fell ill. “But Christians should pray and take medication at the same time,” Deputy Prime Minister (DPM) Thokozani Khuphe said yesterday. 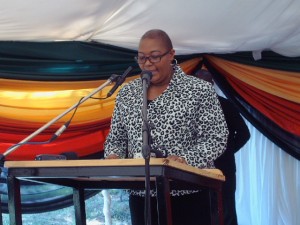 DPM Khuphe, who is suffering from breast cancer, was speaking during the commissioning of an incinerator and unveiling of rehabilitated works at Mpilo Central Hospital in Bulawayo.

“I will not advise anybody not to seek medical attention. Pray to God so that the medication works within your body. I have seen pastors’ wives going for chemotherapy and doing all these processes and at the same time praying,” she added.

DPM Khuphe said she had been praying about her health condition and has since been healed by her faith but continues to take medication, adding that medicine also has its function in the human body.

DPM Khuphe, who is also the patron of the campaign on accelerated reduction of maternal mortality in Africa and president of the African Chapter of the Global Power Women Network, urged Zimbabweans to maintain a positive attitude regardless of whatever ailments they may be having. “With HIV and AIDS, I don’t know why people are afraid and scared. Why should you be afraid? You take your medication you will be fine. I visit these hospitals and I see people – it’s like they are dead already. No! No! No! Don’t be like that! You are okay and even if you are HIV-positive, let the people know,” she encouraged.

DPM Khuphe, also legislature for Makokoba Constituency, who recently underwent a successful operation in South Africa said, “I would also want to thank you because I know you have been praying for me, because of the condition that I have, but I would like to say I think now I am a bit okay, as you can see I am live and kicking.”

The funds for the rehabilitation of the Mpilo hospital were sourced by the Deputy Premier herself from the United Kingdom’s Department of International Development.