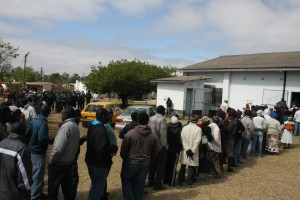 Christians in Bulawayo have come out guns blazing in protest over the recent poll results saying a Zanu PF government will be retrogressive and would reverse all the gains of the Global political Agreement which was instituted in 2009.

Although the post electoral environment has been predominantly peaceful in Bulawayo many people have expressed mixed feelings over the results.

According to the Zimbabwe Electoral Commission (ZEC) –the body that is responsible for running elections in Zimbabwe-Zanu PF presidential candidate Robert Mugabe garnered 61 percent of the presidential vote and his party Zanu PF surpassed two thirds majority in parliament.

Many people who had become comfortable under the government of national unity fear a repeat of the 2008 economic meltdown under a Zanu PF government.

But a local pastor, who refused to be named for security reasons, said a Zanu PF government is the last thing that Zimbabweans want because it has maintained a poor record of economic success.

“Zimbabweans have voted for a cancerous government -they have forgotten what we went through in 2008,” he said.

Christians in Bulawayo went out to vote in their numbers in this year’s harmonised elections, but as the results of the elections started trickling in from all polling stations around the country -it seems a dark cloud has been cast over the city.

“People will suffer in the next 5 years-worse still this part of the country,” Simbarashe Murefu of Miracle Gate Chapel told RelZim.

“Their system of governance will not benefit this region whatsoever,” he added.

Once again Zanu PF lost the Bulawayo vote and as of today most of the seats had gone to MDC-T which has somewhat proven its popularity.

However another city pastor said God is the final authority when it comes to choosing leaders.

“Whosoever wins, is the right person for the post. God is the one who elects leaders,” Abel Musonga a pastor at Great Faith Ministries International said.

He said it is God’s sovereign will to anoint leaders giving examples of David and Saul in the bible who were appointed by God.

On the other hand, Morgan Tsvangirai leader of the MDC and Mugabe’s strong rival said elections were null and void citing fraudulent activities surrounding the electoral process such as a shambolic voters’ roll.