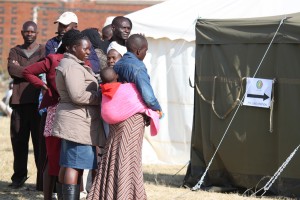 People waiting outside a polling station in Highfields Harare (photo:M.Chibaya).

With polls open for around half their allotted time, the 69-member observation team issued an update report about the conduct of the vote.

“The processes at most of the polling stations observed by the AU observer teams were proceeding in an orderly and peaceful manner,” the organisation said in a statement.

Elections in 2008 were marked by bloodshed and widespread voter intimidation.

The AU mission – which has been criticised by President Robert Mugabe’s challenger Morgan Tsvangirai for painting a rosy picture of vote preparations – is led by former Nigerian leader Olusegun Obasanjo.

He visited polling stations in Harare.

But Tsvangirai and non-governmental groups have voiced concern that the electoral roll, which was not released until the eve of the vote, is ripe for manipulation.

It is alleged the list contains many duplicate and ghost voters.

The Election Resource Centre, an NGO which is collating reports of problems, said it had received multiple reports of ballot papers running out people finding their names were not on the register.

About 600 foreign election observers, mainly from African bodies, have been accredited to watch the polls in addition to 6 000 local observers.

Zimbabwe has not invited Western observer missions because of sanctions imposed on Mugabe and his top officials for rights abuses.