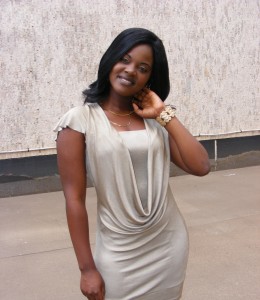 Ex-Fungisai Zvakavapano-Mashavave backing vocalist Jennifer Maneni, who recently released an eight track album titled Total Recovery, is a force to reckon in the music industry as her song s are rocking the gospel charts on local airwaves.

After spending many years as a backing vocalist for several gospel divas, gifted songbird’s latest album is something that shows the musician mean serious business as it is laden by fine music.

Some of the hit songs include Umire Papi? , Amai, Tatenda and Ndakatadza among others.

In an interview Maneni said she never knew that her latest album will take gospel music to greater heights.

“I am grateful that my album is doing much on the local gospel scene and this means I am improving much after my first album that did not do well on gospel charts.”

Maneni added: “I think I have matured musically and my vocals have improved. I am hoping that I am going to maintain my standard. I have stopped working for other musicians so that I can concentrate on my music.”

The gospel diva denied being a copycat of Fungisai despite a similarity of her music in some of the songs.

“I did not copy Fungisai though I worked with her, I was helped by musician Norman Tapambwawho is my producer. My musical beats are different from other musicians in that I fused Chikende, rhumba and jazz music to suit my own style” she said.

Maneni started music at a tender age while at school in Highfield.  After high school she ventured into the gospel music fraternity as a session artiste and as a backing vocalist. She has worked with many musicians in the gospel music industry including Mercy Mutsvene, Fungisai Zvakavapano, Pastor Haisa, Lucky Mabhande,Diana Mabika, Setina Mandivheyi, Dona Chibaya and Joyce Simeti to mention but a few.