Finance minister on the importance of prayer for Zimbabwe

October 13, 2011 , published in News   by Mandla Tshuma
Finance Minister Tendai Biti says Zimbabweans should be praying hard to get the country out of the prolonged financial crisis. 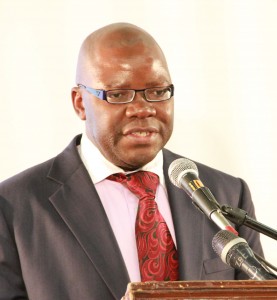 Tendai Biti, Zimbabwe's Finance Minister, stressed the importance of prayer for the economic recovery of the country when he spoke recently to business people in Bulawayo (photo. M. Tshuma).

Minister Biti said this in Bulawayo on October, 10 during the 2012 national budget consultation meeting and the launch of the US$ 40 million Distressed and Marginalised Areas Fund (DiMAF). The fund is earmarked for the resuscitation of ailing companies in the second-largest city.
Addressing stakeholders, who packed the conference room of the Holiday Inn hotel on Monday afternoon, the guest of honour Mr. Biti said older generations of believers could do great exploits in the face of difficult circumstances, something that appears almost impossible to modern Christians.
“Moses in Exodus and Deuteronomy could make anything from anything, but it’s not possible now. We are not praying hard enough,” the Finance Minister stressed.
Moses is biblically known for numerous miracles he did while he led the nation of Israel out of the Egyptian bondage. This included the parting of the Red Sea waters.
Of the estimated Zimbabwe population of 12 million, around 75 % are Christians. Churches have also continued to multiply while genuine and credible miracles are still rare.
Mr. Biti is an Anglican.
Praying for the country’s welfare is not something new to Zimbabweans, as they have always done that during public holidays such as Independence and Africa Days. Recently Christians from across denominations in Bulawayo thronged to Mzilikazi suburb’s MacDonald Hall to pray for peace and tranquility during the elections expected next year.  The gathering also prayed for the Deputy Prime Minister Thokozani Khuphe who is suffering from breast cancer.
Tags: Bulawayo
Tweet