Five years on, Anglican Archbishop of York is critical of Mugabe. Invokes SADC citizens to lobby their leaders

reprinted with additions from the Christian Today 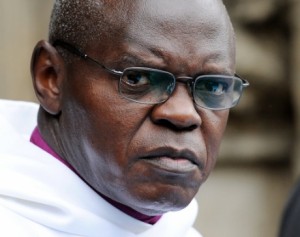 Earlier this month, the Anglican Archbishop of York (second only to the Archbishop of Canterbury) has warned against easing sanctions against Zimbabwean President Robert Mugabe.

Dr John Sentamu said in an article in The Times that he was “not convinced […] the time had come to weaken international opposition to the President of Zimbabwe’s irresponsible, undemocratic, lawless and at times brutal regime”.

It is five years since the Archbishop cut up his clerical collar during an interview on BBC1’s The Andrew Marr Show.

He vowed at the time that he would not wear a clerical collar again until Mugabe ceased to be in power in Zimbabwe.

He wrote in The Times: “I made this prophetic statement as Robert Mugabe had slowly but surely cut up the identity of the Zimbabwean people into tiny pieces. It is fair to say that I did not expect still to be collarless five years on. I’m even asked occasionally why I have forgotten to wear one – but my answer remains that this corrupt and oppressive regime has simply been allowed to carry on for too long.”

He continued by calling upon Britain to “stand in solidarity” with the people of Zimbabwe and “not forget the abuses and exploitation they have suffered at the hands of that administration.”

The Archbishop went on to criticise Zimbabwe’s draft constitution and its cancellation of the right of Zimbabweans to appeal to a supreme legal body to protect their rights.

The Archbishop questioned the effectiveness of the SADC to uphold the rights of Zimbabweans after the SADC Tribunal was suspended and then dissolved last year following pressure from Mugabe. “By dissolving the SADC Tribunal, the leaders of these nations have colluded with Mr Mugabe in his denial of justice to the citizens of Zimbabwe,” said Dr Sentamu.

“It is now time for all communities and organisations within the Southern African region to stand together as one to petition their Heads of State to reinstate and strengthen the mandate of the SADC Tribunal regional court.”

The Archbishop also strongly criticised provisions in the draft constitution which state that no compensation will be paid by the Zimbabwean government for land acquisitions, and which prevent people from challenging the acquisition of land in court.

One sub-clause also states that land acquisition “may not be challenged on the grounds it was discriminatory.”

Dr Sentamu sai,: “Here, for the first time since apartheid was abolished in South Africa, we see a blatantly racist and tribalistic clause added to what may become the new constitution of Zimbabwe. Farmers and farm workers have much to fear from this move.

He continue,: “What we need to see is justice and transformation for the ordinary people of Zimbabwe – the farmers and the workers – we owe them too much to give up now.

“I do hope to wear my collar again before too long, but I it would be best if this is because free and fair elections have taken place in Zimbabwe, legally and peacefully removing from office the President who is responsible for so much violence and destruction. The international community cannot afford to turn its back on the people of Zimbabwe in their hour of need.”

Anglican dean of Norwich: I had come to witness a church in exile